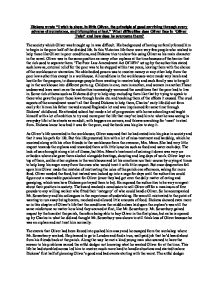 What difficulties does Oliver face in 'Oliver Twist' and how does he overcome them?

Dickens wrote "I wish to show, in little Oliver, the principle of good surviving through every adverse circumstance, and triumphing at last." What difficulties does Oliver face in 'Oliver Twist' and how does he overcome them? The society which Oliver was brought up in was difficult. His background of having no family forced him to begin in the poor half of the divided life. In this Victorian life there were very few people who wished to help those like Oliver in poor conditions, and Dickens tries to show this using Oliver as his main character in the novel. Oliver was in the same position as many other orphans at the time because of the barrier that the rich used to separate them. 'The Poor Law Amendment Act Of 1834' set up by the authorities stated such laws as; external relief for the poor was to be stopped within two years, leaving them with the choice of the workhouse or starvation. No able-bodied person was to receive money or any other help from the poor law authorities except in a workhouse. All conditions in the workhouses were made very harsh and hostile for the paupers, to discourage people from wanting to receive help and each family was to be split up in the workhouse into different parts e.g. ...read more.

Sowerburry. Mr. Sowerbury gained respect by the board at the parish, therefore being able to buy Oliver in the first place, but as he is opened up by Charles in what he did and thought Mr. Sowerbury was shown to still think less of Oliver because he was an orphan and not treat him normally. The events that Oliver had been forced into pushed him away and he escaped from the workshop where Mr. Sowerberry worked. He planned to go to London and find a true, well-paid job that he'd heard about from his friends back at the parish. Along the way he met a kind young man who seamed to have the answer to his problems named the artful dodger not knowing what he wanted Oliver for at the time. This life he had stumbled across led him to receive much more hard to handle situations and started to show Dickens' first half of planning Oliver's good and bad events starting with the worst. The artful dodger covers his true identity with 'mask' of kindness and care towards Oliver making him feel welcome and at home, but along with his teacher, Fagin, they lead Oliver into a circle of crime and deceit. ...read more.

They forced Oliver to assist in a robbery that only Oliver could carry out the first deed to or kill him on site if he refused. But the house they chose to thieve from took it into their own hands after hearing the entry of Oliver were he forced his way through a small window and injured him in a series of frantic shootings trying to get the robbers out of their property. But as Dickens was arranging the events for Oliver another good chapter in Oliver's life was soon to come around when the house that he had actually burgled was his relative and her friend who nurtured him back to health hearing his tragic life in crime. Oliver's circumstances found him again returning to middle-class life and finding out the parts of his he'd missed such as his relatives, and how he came to be an orphan. The point that Dickens' wanted to show was the real 'criminals' who treated the orphan's with little care got their proper sentence in life as Mr. and Mrs. Bumble were forced into a life in the workhouse that they had given all the paupers the hard time in to get them back for their mistakes. The fact was that if society hadn't frowned upon incidents with pregnancy and marriage then paupers and orphans wouldn't exist as much as they did. ...read more.