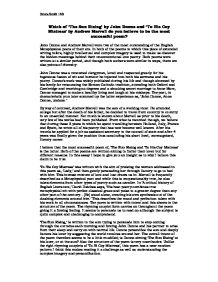 Which of 'The Sun Rising' by John Donne and 'To His Coy Mistress' by Andrew Marvell do you believe to be the most successful poem?

Which of 'The Sun Rising' by John Donne and 'To His Coy Mistress' by Andrew Marvell do you believe to be the most successful poem? John Donne and Andrew Marvell were two of the most outstanding of the English Metaphysical poets of their era. In both of the poems to which this piece of extended writing refers, highly intellectual and complex imagery is used to make us discover the hidden meanings behind their unconventional love poetry. Both poems were written at a similar period, and though both authors were similar in ways, there are also points of diversity. John Donne was a renowned clergyman, loved and respected greatly for his ingenious fusion of wit and humour he injected into both his sermons and his poetry. Donne's work was widely published during his life and though shunned by his family for renouncing the Roman Catholic tradition, attending both Oxford and Cambridge and receiving no degrees and a shocking secret marriage to Anne More, Donne managed to make a healthy living and laugh at his mishaps. The poet, in characteristic pun later summed up the latter experience as, 'John Donne, Anne Donne, undone.' By way of contrast, Andrew Marvell was the son of a working vicar. He attended college but after the death of his father, he decided to travel from country to country in an unsettled manner. ...read more.

Another reason for the fluid feeling of 'To His Coy Mistress' is its rhythm. It is written in iambic tetrameter which is said to be the closest to realistic speech and therefore the easiest to read from. Marvell also uses enjambment which is when sentences go over onto the next line so that the expression of ideas can be less rigid. This is used to sustain the flow of the poem which carries us onto the next line. These techniques have been used in the most effective way in the antithesis. Where the poem would be more tempting to put down and then cause you to leave with a bad impression of Marvell. A quote to show this is: 'The graves a fine and private place, But none, I think do there embrace' Obviously it was not Marvell's intention for his mistress to put the poem down as she was part way through, he needed her to carry on past the ideas of her death and into the relatively positive conclusion in the synthesis. Therefore, in the antithesis there are only 3 sentences over 12 lines. In 'The Sun Rising,' Donne sticks to neither a rhyming scheme nor a poetic meter. What does help his poem along though, are the rhetorical questions put in place so that the reader wants to read on in hope that they will find the answer. ...read more.

The finishing lines are: 'Thus, though we cannot make our sun Stand still, yet we will make him run.' This means that though they realise that they cannot defeat time by standing still, they will do their best to make the sun run after them because they will be trying to get away from it. This similarly to Donne's 'The Sun Rising' personifies and makes fun of the sun and time. Both poems do this to a very good effect and the reader enjoys the image of the dominating sun being told to change because someone is in love and wants more time to live. In conclusion, both poems are well written in different aspects with similar boasting and condescending personification of the sun. I think the more successful of the two is 'To His Coy Mistress' by Andrew Marvell because of its flowing techniques and winning structured argument in comparison to the more confusing and muddled, 'The Sun Rising' by John Donne. I believe that Marvell would be more likely to succeed in getting his mistress to sleep with him (as long as she is intelligent enough to see past the intense imagery but somehow blinded to the obvious fact that the sole reason for this literary exercise is in fact, that) than Donne is to have the sun obey him and the world in his bedroom. Emma Smith 10B ...read more.

There are some good attempts at analysis of the two poems here and overall, a good general understanding. There is also an attempt at consistent comparison. The essay could be improved with a more structured answer, enabled by clear planning. Some key poetic techniques are not analysed, and there are not enough direct references to the poems (use of quotes). Some point made are inaccurate. Contextual references need to be integrated into the analysis of the essay and only used if they contribute to the analysis. It is also best to try and omit subjective comments and avoid descriptive re-telling of the poems.