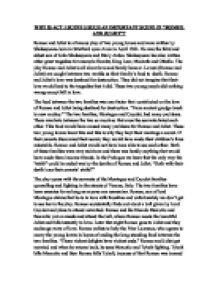 WHY IS ACT 1 SCENE 5 SUCH AN IMPORTANT SCENE IN ROMEO AND JULIET?

WHY IS ACT 1 SCENE 5 SUCH AN IMPORTANT SCENE IN "ROMEO AND JULIET"? Romeo and Juliet is a famous play of two young lovers and were written by Shakespeare-born in Stratford upon Avon in April 1564. He was the third and eldest son of John Shakespeare and Mary Arden. Shakespeare has also written other great tragedies for example Hamlet, King Lear, Macbeth and Othello. The play Romeo and Juliet is all about love and family honour. Lovers (Romeo and Juliet) are caught between two worlds as their family's feud to death. Romeo and Juliet's love was destined for destruction. They did not imagine that their love would lead to the tragedies that it did. These two young people did nothing wrong except fall in love. The feud between the two families was one factor that contributed on the love of Romeo and Juliet being destined for destruction. "From ancient grudge break to new mutiny." The two families, Montague and Capulet, had many problems. There was hate between the two so much so that even the servants hated each other. This feud would have caused many problems for Romeo and Juliet. These two young lovers knew this and this is why they kept their marriage a secret. ...read more.

" Romeo arrives at the ball and he notices Juliet. "So shows a snowy dove trooping with corns, as younder lady o'er her fellows show." Romeo says that Juliet is more beautiful than the other girls-like a dove among a load of crows. "Did my heart love till now? Forswear it, sight! For I ne'er saw true beauty till this night." This quote suggests that Romeo is in love and he is questioning himself. Tybalt detects Romeo and wants to fight him but Lord Capulet stops him because he doesn't want his party to be ruined. "Content thee gentle coz, let him alone." Tybalt was furious because Lord Capulet stopped him. "It fits when such a villain is a guest". Romeo and Juliet kiss and falls in love, but they don't know that they are enemies until the nurse tell them. "My only love sprung from my only hate. Too early seen unknown, and known too late." Juliet was heart broken and she says the only person I love was brought into the world by the only people I hate. I know who he is now but it's too late. "O dear account! My life is my foe's debt." ...read more.

Romeo refers to Juliet as a saint and Juliet refers to Romeo as shrine. Romeo sees himself as a pilgrim worshipping her. A sonnet's expression of the lyrical "T" allows Shakespeare to break the limit of dramatic performance and to involve his audience emotionally as if they were recipients to a poem. This therefore means that by making the audience of the two different breaks down, and the other, where Romeo and Juliet is the centre of the universe. I think act 1 scene 5 is a very important scene because it is where Romeo and Juliet meet for the first time and fall in love. The themes that can be found in this scene are: love, marriage, conflict and hate. Love in this scene refers to Romeo meeting Juliet and them instantly falling in love. Marriage in this scene refers to when Paris wants to marry Juliet. Conflict in this scene refers to when Tybalt wants to get Romeo taken out of the Capulet party. Hate in this scene is seen in Capulet's party being gate crashed by Romeo Montague and that the families are foes. "From forth the fatal loins of these two foes, a pair of star crossed lovers take their life." Romeo and Juliet's death was a result of many misfortunes, but they were mostly victims of the society in which they live, malignant fate, and there own passions. ...read more.