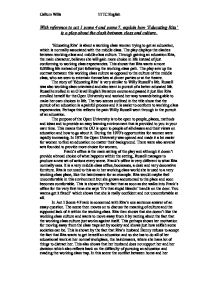 With reference to act 1 scene 4 and scene 7, explain how Educating Rita is a play about the clash between class and culture.

With reference to act 1 scene 4 and scene 7, explain how 'Educating Rita' is a play about the clash between class and culture. 'Educating Rita' is about a working class woman trying to get an education, which is normally associated with the middle class. The play displays the clashes between working class and middle class culture. Through gaining an education Rita, the main character, believes she will gain more choice in life instead of just conforming to working class expectancies. This shows that Rita wants a more fulfilling life instead of just following the working class path. The play sets up the contrast between this working class culture as opposed to the culture of the middle class, who are seen to entertain themselves at dinner parties or at the theatre. The story of 'Educating Rita' is very similar to Willy Russell's life. Russell was also working class orientated and also went in pursuit of a better-educated life. Russell enrolled in an O level English literature course and passed it just like Rita enrolled herself for the Open University and worked her way towards being able to make her own choices in life. ...read more.

which shows that she is really confident and not uncomfortable at all. In Act 1 Scene 4 Frank is concerned with Rita's one sentence answer of an essay question. The scene then moves on to discuss the meaning of culture and the supposed lack of it within the working class. Rita then shows that she doesn't like the working class culture and wants to move away from it by ranting about the fact that the working class culture just works against itself. This perhaps shows her motivation for moving away from the class traps set by society and shows just how selfish some societies can be. This is shown by the fact that Rita's husband Denny refuses to accept the fact that Rita wants to get herself an education and so she has to do all of her educational work at her normal workplace, the hairdressers, where she has a lot of things to distract her. This also shows that her husband does not support her and her decision which also reflects back on the difficulty of pursuing an education and evading the working class trap. ...read more.

Class distinction plays a big part in this play as expectancies for Rita are very working class whereas she wishes to change and find herself new options in life and give herself the chance to make her own choices. The classes are not necessarily better than one another but simply different. The working class and middle class both have their own culture and while one may not be better than the other, the middle class offers greater opportunities. This class difference theme does link to today, the class trap does still exist today however much it may not be apparent. People need to take every opportunity they get as once that opportunity is gone, it is incredibly hard to regain it and sometimes impossible. The class divisions in society say a lot about the way some people are very selfish in modern day society. In order for people to change where their lives are headed they need support and with the class divisions in place and expectancies to meet that support is sometimes hard to get. ?? ?? ?? ?? Callum Wills 11TC English ...read more.