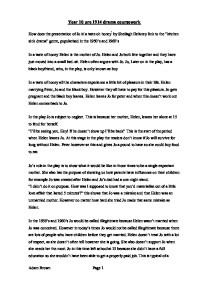 Year 10 pre 1914 drama coursework How does the presentation of Jo in ?a taste oh honey ? by Sheilagh Delaney link to the "kitchen sink drama" genre, popularised in the 1950's and 1960's In a taste of honey Helen is the mother of Jo. Helen and Jo both live together and they have just moved into a small bed-sit. Helen often argues with Jo. Jo, Later on in the play, has a black boyfriend, who, in the play, is only known as boy In a taste of honey all the characters experience a little bit of pleasure in their life. Helen marrying Peter, Jo and the black boy. However they all have to pay for this pleasure. Jo gets pregnant and the black boy leaves. Helen leaves Jo for peter and when this doesn't work out Helen comes back to Jo. In the play Jo is subject to neglect. This is because her mother, Helen, leaves her alone at 15 to fend for herself. "I'll be seeing you. Hey! If he doesn't show up I'll be back" This is the start of the period when Helen leaves Jo. ...read more.

In this scene, when Helen leaves Jo, Delaney creates pathos towards Jo. This is to make the audience feel sorry for Jo and the situation she is being put in. In the 50's and 60's the class system was very different from how it is today. In the play Helen and Jo would have been in the lower class as they had poor paying jobs and were living in bedsits. This means that people in the other classes viewed Jo and Helen as dirt on the street, like they didn't belong there. They also had little education, Helen couldn't provide enough money to give Jo a proper upbringing, so they had poor jobs however both Helen and Jo both seem quite intelligent. At the start of the play we find out that Helen and Jo don't like being in each other's company. They do not like each other as they have different views on life. They also don't act together as a mother daughter should we know this because Jo calls her mother Helen instead of mother or mom. ...read more.

This makes their lives extremely hard. Most of the times when we she Jo she is in a one bedded room this shows that she is deprived of the most needy of things. We also see in the play that Helen and Jo don't talk in the "Queens English" as this was how most people in theatre and radio spoke at the time. They use slang and swear they also use language that would be considered to be discriminating by today's standards. This would be a daring thing to do at the time because it was thought of as wrong. "You dirty bastard" this is when Helen and Peter come back and see Jo and Geoff. This would have made people who spoke the Queens English think that there were other people who lived in the country and that not all people spoke in the Queens English. We find in the play that kitchen sink dramas were all about people who live in the working class, and that the plays were about real things that could happen and not things that are made up for the enjoyment of the rich. Adam Brown Page 1 ...read more.