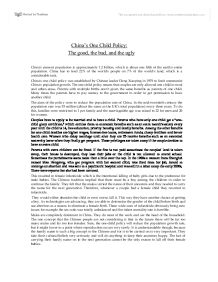 Chinas One Child Policy: The good, the bad, and the ugly

China's One Child Policy: The good, the bad, and the ugly China's present population is approximately 1.2 billion, which is about one fifth of the earth's entire population. China has to feed 22% of the world's people on 7% of the world's land, which is a considerable task. China's one child policy was established by Chinese leader Deng Xiaoping in 1979 to limit communist China's population growth. The one-child policy means that couples are only allowed one child in rural and urban areas. Parents with multiple births aren't given the same benefits as parents of one child. Many times the parents have to pay money to the government in order to get permission to have another child. The aims of the policy were to reduce the population rate of China. In the mid-twentieth century the population rate was 55 million (about the same as the UK's total population) every three years. To do this, families were restricted to 1 per family and the marriageable age was raised to 22 for men and 20 for women. Couples have to apply to be married and to have a child. ...read more.

This resulted in female infanticide which is the intentional killing of baby girls due to the preference for male babies. The Chinese tradition implied that there must be a boy among the children in order to continue the family. They felt that the males carried the name of their ancestors and they needed to carry the name for the next generation. Therefore, whenever a couple had a female child they reverted to infanticide. They would either abandon the child or even worse, kill it. This way they have another chance at getting a boy. As technologies are advancing, they are able to determine the gender of the child before birth and use abortion as a means to eliminate a female birth. These wide uses of infanticide obviously bring new issues for example the sex ratio was totally unbalanced and the infant mortality rate is horrible. Males are completely dominant in China. They do most of the work and are the head of the household. The one concept that the Chinese people are not considering is that in the future there will be far too many males and far too less females. ...read more.

This always does not work because a lot of these countries in the surrounding area of the country are hesitant in allowing Chinese refugees onto their land. One the plus side, the policy has worked as the population has become manageable. If every couple in China had two children, instead of one, from the time the one child policy was introduced, then China would have been in poverty now. The one child policy ensures that China's citizens have a good standard of living in the future. Overall in my opinion, one child policy has been successful as it has lowered the population. It has ensured that the will be no immediate poverty in China and has bettered the living standards. However, it has been highly distressful for millions of Chinese. I do not agree with the policy, because I believed it is highly immoral to kill children and deny people some of their basic human rights. There is evidence that suggests that if the policy continues, the death rate will be considerably higher than the birth rate. This will result in not enough people for labor and not enough women for marriage. ...read more.

The answer to the question and the outline of the policy is done very well. The candidate goes into a great amount of detail of the policy and the impacts that have been created by it, considering both the negative ...

The answer to the question and the outline of the policy is done very well. The candidate goes into a great amount of detail of the policy and the impacts that have been created by it, considering both the negative and positive aspects ending with a good well thought out conclusion.

The candidate introduces the topic well and outlines why the topic is seen as a problem in China. The candidate begins by outlining what the policy meant to the chinese government, it may have been useful to compare it to the forced sterilisation policy that used to be implemented. The candidate then outlines in good depth why there are very serious problems with the one child policy and why the policy needs a lot of work based on the chinese traditions. Their conclusion is adequate apart from the two ending sentences which are not well considered. Just because the population has declined this does not mean that there will be labor and women shortages in the future.

Punctuation, grammar and spelling all to a very high level. The format of the essay is done very well with easy to read split up paragraphs.