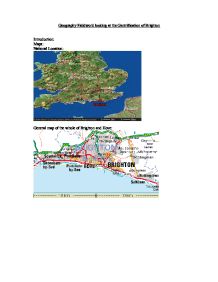 Geography Fieldwork looking at the Gentrification of Brighton.

Geography Fieldwork looking at the Gentrification of Brighton Introduction: Maps: National Location: General map of the whole of Brighton and Hove: Seven Dials Road Map: Brighton began as a small fishing village. The town changed from a small fishing and farming village when it was claimed by Dr Richard Russell to have an amazing sea-water cure. Almost overnight it became the fashionable weekend and holiday resort of London's high society. When George, Prince of Wales at that time, decided to make his home there, Brighton's popularity soared. The town underwent an amazing transformation and many local people capitalised on this and made money. Therefore, the majority of development of the area was in Regency times, which explains the majority of housing having Victorian and Edwardian architecture (Victorian and Edwardian terraces). This was in the early 19th and late 18th century. Brighton's current population is about 260,000. After its boom in the early 19th century, the area declined significantly and until recently (30 years ago) it was in need of much development and renovation. The study area is around OS grid reference 530735,104797. Aims: * The overall aim is to investigate the process of gentrification and to look at its impact on Brighton and especially Seven Dials. * To see whether building and environmental quality changes on different roads of Seven Dials and to subsequently explain why any differences occur. ...read more.

London. It will also show when gentrification started to occur in Seven Dials. Secondary data collection methods: Kelley's Directories: Look up the shop functions from 1947 and then compare with the data collected in 2001. Why it is appropriate and explanation: This is appropriate because it allows us to directly compare the shops in 1947 and the ones in 2001 which then means that it will be possible to see how the shops and services changed. This will give an indication of when gentrification began in the area. House Prices: House price magazines were collected in Brighton from Estate Agents. The information used was only for the houses situated in the Seven Dials area. Why it is appropriate and explanation: It is appropriate because it allows the comparison of similar houses which makes it possible to see in which areas of the city housing is in the greatest demand. It will also allow us to see whether the distance from the station is directly proportional to the price of the house. This will answer one of my hypotheses. Government statistics: This was gathered from the internet, and I concentrated on getting indices of deprivation in Seven Dials and unemployment figures for Brighton, Why it is appropriate and explanation: This will show the areas of Brighton which are in the greatest need of gentrification because they are so run-down, and also the areas which might start to gentrify shortly even though the process has not started yet, and the areas which have completely gentrified. ...read more.