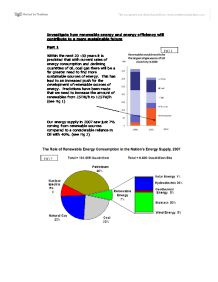 Investigate how renewable energy and energy efficiency will contribute to a more sustainable future Part 1 Within the next 20 -30 years it is predicted that with current rates of energy consumption and declining quantities of oil, coal gas there will be a far greater need to find more sustainable sources of energy. This has lead to an increased push for the development of renewable sources of energy. Predictions have been made that we need to increase the amount of renewables from 25TW/h to 125TW/h (see Fig 1) Our energy supply in 2007 saw just 7% coming from renewable sources compared to a considerable reliance in Oil with 40%. (see Fig 2) Fig 3 shows the growth in the generation of energy from renewable energy sources. Hydroelectric power was seen as the possible answer to providing the UK with renewable energy. ...read more.

Fig 7 shows a range of sustainable methods that homeowners could use to do this. It would also bring homeowners the added advantage of lowering energy bills. Part 2 Some feel that the costs of producing more electricity using renewable methods is costing to much money and is being at the expense of the general public through their electricity bills; 'electricity customers paying over �1 billion per year to subsidise wind farms and other forms of renewable energy'. (Sunday Telegraph) The British Government has set targets for increasing the amount of fuel produced from renewable sources and these fit in with the European Union targets. 'Renewables in the UK are not yet a significant source of energy. As of 2008 renewables constituted 2.25% of energy sources. The UK has an EU target for renewable energy of 15% by 2020 to fit within the EU's overall target of 20%.' ...read more.

The Thanet Wind Farm in Kent employed 3,600 people during its construction, with 30% of workers from the UK. In addition to this, up to 20 technicians from the local area have now been employed to work there full time. Wind farms generate negative feeling from local residents regarding the aesthetics of them. "I don't like them. I look at the (turbines) and I think they're an eyesore quite honestly." (BBC News, South Today) There has been some concern that the British government is putting too much focus on wind power as the answer to our energy supply problems, with a lack of investment in other alternatives such as the Severn Tidal Barrage. 'Professor Ian Fells, an energy expert, said: "What worries me is the government seems to be obsessed with the option of wind farms and neglects other sources of renewable energy, which in may ways could be more important.' (BBC News) ...read more.