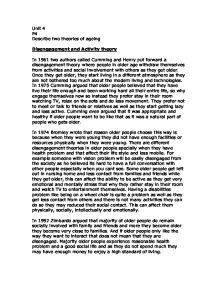 Unit 4 P4 Describe two theories of ageing Disengagement and Activity theory In 1961 two authors called c*****g and Henry put forward a disengagement theory where people in older age withdraw themselves from activities and social involvement with others as they get older. Once they get older, they start living in a different atmosphere as they are not bothered too much about the modern living and technologies. In 1975 c*****g argued that older people believed that they have live their life enough and been working hard all their entire life, so why engage themselves now so instead they prefer stay in their room watching TV, relax on the sofa and do less movement. They prefer not to meet or talk to friends or relatives as well as they start getting lazy and less active. c*****g even argued that it was appropriate and healthy if older people want to be like that as it was a natural part of people who gets older. ...read more.

In 1992 Zimbardo argued that majority of older people do remain socially involved with family and friends and more they become older they become very close to families. And if older people only like the way they want to interact that does not mean that they are disengaged. Majority older people experience reasonable health problem and a good social life and as they do not spend much they may have enough money to enjoy a high standard of living. Some older people may result in a loss of income and could not engage themselves socially and after leaving work for retirement they loose the work colleagues who they use to socialize before, that make sure disengage themselves and loss interest in their life. Older people with physical disability may lose contact with friends or going out as they may not be able to drive, see or hear. As they getting older they start feeling stereotype as being useless or too slow to cope because younger people are developing new skills that taking time for them to understand and ...read more.

As some older people who been exercising a lot when they were young like cycling, playing squash can carry on doing it when they get older. Older people who live in residential care home do lots of activities like board games (scrabble) group discussion and quizzes and dance movement from music. As people get older, their nerve cell in the brain gets weaker and that can cause loss of memory. To prevent this disease, some older people choose to be mentally active by taking courses and get involve in studies, meeting friends and have conversation and discussion about the course itself and stay late in the library with group of friends doing activities and engage them in discussion. When older people feel have health problem like hearing, vision or disability, they feel very difficult to interacts with others as the relatives, and friends reduced social contact with them which make them disengage and feel depress Once we grow older we have to take our own responsibilities by engaging ourselves in outdoor activities instead of depending on children and friends. By engaging ourselves it can make us live longer and keep physically active ...read more.