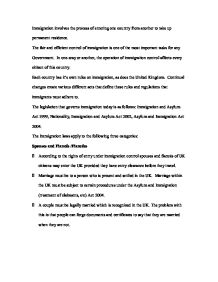 Immigration involves the process of entering one country from another to take up permanent residence.

Immigration involves the process of entering one country from another to take up permanent residence. The fair and efficient control of immigration is one of the most important tasks for any Government. In one-way or another, the operation of immigration control affects every citizen of this country. Each country has it's own rules on immigration, as does the United Kingdom. Continual changes create various different acts that define these rules and regulations that immigrants must adhere to. The legislation that governs immigration today is as follows: Immigration and Asylum Act 1999, Nationality, Immigration and Asylum Act 2002, Asylum and Immigration Act 2004. The Immigration laws apply to the following three categories: Spouses and Fianc�s /Fianc�es * According to the rights of entry under immigration control spouses and fianc�s of UK citizens may enter the UK provided they have entry clearance before they travel. * Marriage must be to a person who is present and settled in the UK. Marriage within the UK must be subject to certain procedures under the Asylum and Immigration (treatment of claimants, etc) Act 2004. * A couple must be legally married which is recognized in the UK. ...read more.

of the definition of a 'child' which is defined by The Children Acts Act 1989 as any persons under the age of 18; * Must not be leading an independent life and is unmarried * Accommodated in accommodation owned or occupied exclusively by their parent or parents without reliance on public funds. Additional evidence maybe requested in order to prove the age of the child and that they are in fact a child of the person that they say they are. Evidence such as; - medical or school reports, and DNA fingerprinting are all acceptable forms of evidence this in turn may cause various problems as medical technology and funding may not be adequate. There is no specific requirement when a child has one parent due to the death of the other parent, other than to provide evidence of the parent's death by issuing a death certificate. Applicants must show that the parent, the child seeks to join is settled in the UK and has "sole responsibility", as seen in the Philippines UKLAT 00109 case where a Pilipino mother came to the UK leaving her children behind with relatives. ...read more.

Clearly relatives are faced with several strict rules. These laws may not be quite as easy to follow. There may be problems for some relatives to enter the UK. This could be due to the fact that there are various situations whereby individuals cannot meet all the requirements. For instance someone may have a relative in his or her own country that could support him or her but for whatever reason will not. How would this be proved? Or perhaps a single mother really needs to immigrate to the UK to earn money and would need the support of family members to help look after the child. However the relative that she may live with in the UK may not be able to support her financially, so until she can work she may be refused entry. These are just a few situations whereby individuals may genuinely need to enter the UK but cannot satisfy all the regulations. This is just one of the reasons immigration laws are constantly changing to create the best possible system. Group members Raychelle Swift 0483358 Lucy King 0482937 Daljit Kaur Hunjan 0463648 Emma Gullock 0470343 Rajinder Kaur Uppal 0466008 Amandip Kaur 0467888 Gurpinder Tiwana 0465234 Stavrou Kalliopi 0378373 Kelly Forrester 0484540 ?? ?? ?? ?? ...read more.