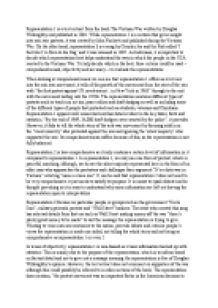 Analyse and evaluate three representations of history: Protests against the Vietnam War

﻿Representation 1 is a text extract from the book The Vietnam War written by Douglas Willoughby and published in 2001. While representation 2 is a cartoon that gives insight into anti-war protests, it was created by John Fischetti and published during the Vietnam War. On the other hand, representation 3 is a song by Country Joe and the Fish called ?I feel like I?m fixin to die Rag? and it was released in 1967. As historians, it is important to decide which representation best helps understand the way in which the people in the USA reacted to the Vietnam War. To help decide which is the best, three criteria could be used ? comprehensiveness, objectivity and accuracy ? to evaluate the representations. When looking at comprehensiveness we can see that representation 1 offers an overview into the anti-war movement; it tells of the growth of the movement from the start of the war with ?the first protest against US involvement?in New York in 1963? through to the end with the movement lasting into the 1970s. The representation mentions different types of protests such as teach-ins, sit-ins, peace rallies and draft dodging as well as including some of the different types of people that protested such as students, veterans and Christians. ...read more.

In terms of objectivity, representation 1 is non-biased as it uses information backed up with statistics. This is mainly due to the purpose of the representation, which is to inform based on factual detail and not to give out a message meaning the representation is free of Douglas Willoughby?s opinion. However, the text extract does not comment on supporters of the war although this could possibly be referred to in other sections of the book. The representation does mention, ?the protest movement was an important factor in the American decision to leave Vietnam and in ending the war itself?. This is an opinion though Douglas Willoughby gives evidence to back up this claim. Representation 2 being a cartoon fully supports the cartoonist?s anti-war point of view and, by that measure cannot be objective. The purpose of the cartoon is to give out a message and to provoke debate and John Fischetti does this by satirising the anti-war movement and stereotyping the characters. He also makes a conscious decision about what information to include and what to leave out in order to support his point of view and the anti-war message the representation is trying to give out. ...read more.

It is also reflective of the way people felt because it gained popularity at the Woodstock Music and Art Fair in 1969 at a time when protest against the war was growing and only 32%-39% of people still supported the war. While the song does not also focus on those who supported the war it is nevertheless accurate in its depiction of opposition to the war. In conclusion, with all three of my chosen criteria taken into account I believe the representation that best represents the way in which people in the USA reacted to the Vietnam War is representation 1. The representation was the most comprehensive of the three offering an overview of the movement though it failed to tell a balanced story, representation 2 and 3 were less comprehensive with the authors of those representations selecting details to suit their own message. Representation 1 was also the most objective due to its purpose, which is to inform, on the other hand the other representations were biased due to their purposes, which is to provoke debate and entertain. Finally, representation 1 was undoubtedly the most accurate with information easily verified by other sources whereas the other representations contain inaccuracy. ...read more.