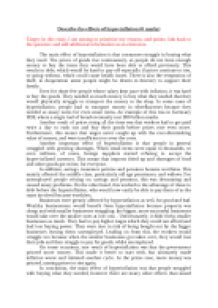 Describe the effect of hyperinflation

﻿Describe the effects of hyperinflation (6 marks) Target: In this essay, I am aiming to prioritise my reasons, and points; link back to the question; and add additional information as an extension. The main effect of hyperinflation is that consumers struggle in buying what they need. The prices of goods rise continuously, so people do not have enough money to buy the items they would have been able to afford previously. This results in debt, which would be hard to pay off especially if prices continue to rise, or going without, which could cause health issues. There is also the temptation of theft; in desperation some people might be drawn to thievery to support their family. Even for those few people whose salary kept pace with inflation, it was hard to buy the goods. ...read more.

Furthermore, this meant that wages never caught up with the ever-diminishing value of money, and were insufficient to cover the costs. Another important effect of hyperinflation is that people in general struggled with growing shortages. When small items were equal to thousands, or even millions, of notes, foreign suppliers started refusing to accept the hyper-inflated currency. This meant that imports dried up and shortages of food and other goods got worse, for everyone. In addition, savings, insurance policies and pensions became worthless. This mainly affected the middle class, particularly old age pensioners, and widows. For unemployed people relying on savings and pensions, this was devastating and caused many problems. On the other hand, this worked to the advantage of those in debt before the hyperinflation, who would now easily be able to pay them of as the sums involved became worthless. ...read more.

Leading on from this, the workers would struggle too because when the smaller businesses got taken over, they would lose their jobs and then struggle to pay for goods, whilst unemployed. . On some occasions, one result of hyperinflation was that the government printed more money. This made it better to start with, but ultimately made inflation worse and initiated another cycle. As the prices rose, more money was printed, causing prices to rise again. In conclusion, the main effect of hyperinflation was that people struggled with buying what they needed, however there are many other effects that caused shortages and hardship: savings and debts becoming worthless, bigger businesses taking over the smaller ones, leading to unemployment, and the government printing more money. There are lots of effects of hyperinflation, and although it benefited a few people, on the whole, it caused chaos and misery for the people. ...read more.