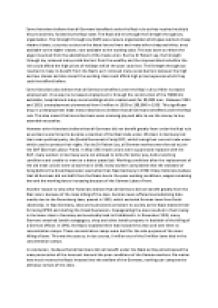 Did all Germans benefit under Nazi rule?

Transfer-Encoding: chunked ﻿Some historians believe that all Germans benefited under the Nazi rule as they received multiple leisure activities, funded by the Nazi state. The Nazis did this though the Strength through Joy organisation. The Strength through Joy (KdF) was a leisure organisation which gave workers cheap theatre tickets, cut-price cruises on the latest luxury liners and many other cheap activities, once available to the higher classes, now available to the working class. This was done to relieve the anger mounted from the abolishment of the trade union. Run by Dr Robert Ley, the Strength through Joy removed many social barriers from the wealthy and the impoverished as before the rich could afford the high prices of holidays which the poor could not. ...read more.

However other historians believe that all Germans did not benefit greatly from under the Nazi rule as workers were forced to become a member of the Nazi trade union. Workers in Germany lost their main political party, the (Social Democratic Party) SDP, whilst losing their current trade union which used to protect their rights. Run by Dr Robert Ley, all German workers were forced to join the DAF (German Labour Front). In May 1933 trade unions were suppressed replaced with the DAF, many workers in Germany were not allowed to strike for better pay, better working conditions and unable to move to a better payed job. Working conditions after the replacement of the old trade unions were so bad that in 1930, many workers complained that the standard of living before the Great Depression was better than Nazi Germany in 1930. ...read more.

In November 1938, many Germans smashed Jewish synagogues, shop and other Jewish property in backlash of the killing of a German official. In 1942, the Nazis escalated their hate toward the Jews and sent them to concentration camps. These concentration camps were built for the sole purpose of the mass killing of Jews. This was the case as, in due course, 6 million out of the 8 million Jews died in the concentration camps. In conclusion, I believe that all Germans did not benefit under the Nazis as they all witnessed the mass persecution of the innocent Jew and the poor conditions of the German workers. No matter how much money the Nazis invested into the welfare of the Germans, nothing can compare the oblivious torture of the Jews. ...read more.