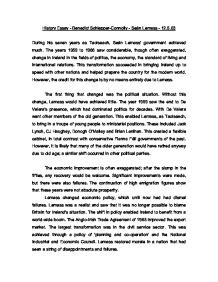 During his seven years as Taoiseach, Sen Lemass' government achieved much. The years 1959 to 1966 saw considerable, though often exaggerated, change in Ireland in the fields of politics, the economy, the standard of living and international relations.

History Essay - Benedict Schlepper-Connolly - Se�n Lemass - 12.5.03 During his seven years as Taoiseach, Se�n Lemass' government achieved much. The years 1959 to 1966 saw considerable, though often exaggerated, change in Ireland in the fields of politics, the economy, the standard of living and international relations. This transformation succeeded in bringing Ireland up to speed with other nations and helped prepare the country for the modern world. However, the credit for this change is by no means entirely due to Lemass. The first thing that changed was the political situation. Without this change, Lemass would have achieved little. The year 1959 saw the end to De Valera's presence, which had dominated politics for decades. With De Valera went other members of the old generation. This enabled Lemass, as Taoiseach, to bring in a troupe of young people to ministerial positions. ...read more.

Lemass restored morale in a nation that had seen a string of disappointments and failures. However, the Lemass years saw an influx of foreign investment. 360 foreign manufacturers were established themselves in Ireland between 1960 and 1969. This removes much of the glory from Lemass. The delay in entering the EEC limited the country's export potential. At times the state seemed close to bankruptcy. Economic planning was based on a series of Programmes for Economic Expansion devised by TK Whitaker. Only one out of three of these achieved its aims. Little was done to assist agriculture and many accused Lemass of being too much 'an urban person'. There was a tremendous improvement in the standard of living. Most of this is attributable to the Lemass government. Other elements were simply a result of a global change. The education system was revamped. ...read more.

Lemass believed in the unification of people rather than territory but never achieved this. Ireland sent troops on a United Nations mission to the Congo in 1960. The nation had remained neutral until then. Minister for Foreign Affairs Frank Aiken implemented a policy of remaining neutral only on cold war issues. This confused and superficial plan still has repercussions today. Lemass government neither created a neutral policy nor one without constraints. This problem has caused governments to be indecisive, most recently in response to US planes landing at Shannon. Ireland was transformed from 1959 onward. Se�n Lemass has often been given too much credit for this. The developments were largely due to his team of young, intelligent and resourceful individuals. Most of the government's successes were due to plans designed by men such as Whitaker and O'Malley. Also, it could be suggested that change was inevitable - that Lemass was merely in the right place at the right time. Despite this, Lemass' enthusiasm and determination piloted this change and his contribution to Irish history is important. ...read more.