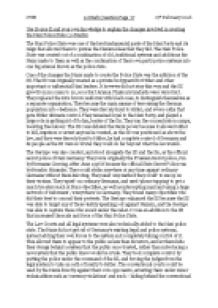 Explain the changes involved in creating the Nazi Police State

Transfer-Encoding: chunked ﻿CWK 10 Mark Question Page 37 27th February 2016 Use Source E and your own knowledge to explain the changes involved in creating the Nazi Police State (10 Marks) The Nazi Police State was one of the key fundamental parts of the Nazi Party and its reign that allowed them to pursue the Nazism ideas that they did. The Nazi Police State was created out of a combination of old, traditional systems and additions the Nazis made to them as well as the combination of their own party police systems into one big arsenal known as the police state. One of the changes the Nazis made to create the Police State was the addition of the SS. The SS was originally created as a private bodyguard for Hitler and other important or influential Nazi leaders. ...read more.

The Gestapo was also created, and stood alongside the SS and the SA, as the official secret police of Nazi Germany. They were originally the Prussian Secret police, run by Hermann Goering. After June 1936 it became the official State Secret Police run by Hendric Himmler. They could strike anywhere at any time against ordinary Germans without them knowing. They used ?any method they could? to snoop on their victims. They ?spied? on ordinary Germans, and used ?phone tapping? to get a much broader reach at Nazi objectifies, as well as intercepting mail and using a huge network of ?informers?, ?everywhere? in Germany. They found many objectifies who did their best to conceal their protests. The Gestapo enhanced the SS because the SS was able to target any of those visibly speaking out against Nazism, and the Gestapo was able to capture those who snuck under the radar. ...read more.

This allowed the Nazis to consolidate their power legally behind a system that the public once trusted to be a fair and democratic one. Rather than creating a new system they hid behind the existing ones, exploiting it under minor technicalities and having people killed for them. It allowed them to secretly increase their legal power. It allowed arrests, for example, made by the SS and Gestapo to be followed through in court without doubt and a fair trial, in favour of Nazism. In conclusion, many changes were made to the police system in Germany to make it become the Nazi Police System. They created new groups, like the SS and Gestapo, that interleaved with each other to reach a broad breadth of power, and by incorporating the legal system into the Nazi Police State, they were able to categorically make convictions without a fair trial, allowing them to do pretty much what they wanted. ...read more.