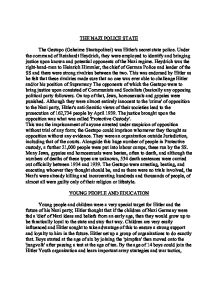 THE n**i POLICE STATE The Gestapo (Geheime Staatspolizei) was Hitler's secret state police. Under the command of Reinhardt Heydrich, they were employed to identify and bringing justice upon known and potential opponents of the n**i regime. Heydrich was the right-hand-man to Heinrich Himmler, the chief of German Police and leader of the SS and there were strong rivalries between the two. This was endorsed by Hitler as he felt that these rivalries made sure that no one was ever able to challenge Hitler and/or his position of Supremacy The opponents of which the Gestapo were to bring justice upon consisted of Communists and Socialists (basically any opposing political party followers. On top of that, Jews, homosexuals and gypsies were punished. Although they were almost entirely innocent to the 'crime' of opposition to the n**i party, Hitler's anti-Semitic views of their societies lead to the prosecution of 162,734 people by April 1939. The justice brought upon the opposition was what was called 'Protective Custody'. This was the imprisonment of anyone arrested under suspicion of opposition without trial of any form; the Gestapo could imprison whomever they thought as opposition without any evidence. They were an organization outside Jurisdiction, including that of the courts. Alongside this huge number of people in Protective custody, a further 21,000 people were put into labour camps, these run by the SS. Many Jews, gypsies and homosexuals were beaten, often to death, and although the numbers of deaths of these types are unknown, 534 death sentences were carried out officially between 1934 and 1939. The Gestapo were arresting, beating, and executing whoever they thought should be, and as there were no trials involved, the n**i's were already killing and incarcerating hundreds and thousands of people, of almost all were guilty only of their religion or lifestyle. YOUNG PEOPLE AND EDUCATION Young people and children were a very special target for Hitler and the future of his n**i party; Hitler thought that if the children of n**i Germany were fed a ...read more.

This was because the raw materials came from the Government in the first place. In 1934, Schacht cut the amount of raw cotton and wool that Germany was importing, and replaced it with increased iron ore imports, to increase the heavy industry production levels. One of the central aims of the heavy industry was to manufacture armaments, and by 1939 the military expenditure was 16 times greater than in 1933. A great aspect of the increasing armaments was the employment provided by it, thus unemployment decreased astoundingly to only 200,000 from 5.6 million in 1932. This was due to hundreds of thousands of workers being drafted into munitions factories to build guns and tanks needed for the rearmament of Germany. By 1939, 32,300,000 marks were spent annually on military expenditure. Soon, trade unions were abolished and workers lost their right to strike, in return they were rewarded with bonuses like cheap theatre tickets and subsidised holidays, along with tightly controlled rents. Even more workers were employed in massive work schemes like the building of autobahns (motorways) throughout Germany. Things were the best they could ever be for factory owners; they were earning hug amounts of money, and their workers couldn't strike, so the money would continue to keep piling in for a fair time to come. Cheap housing for workers were provided, much the same as in the industrial revolution in England half a century before. Re-armament was one of Hitler's most important priorities; he was massing an army, to gain back what was taken from Germany in the infamous Treaty of Versailles back in 1919. He was attempting to make Germany an autarky, a nation dependant on no outside influences, in other words, a self-sufficient state. He began focusing on the production of synthetic raw materials, like rubber and oil, alongside wool, although this side project failed to hail any success for his economy. ...read more.

Soon wages had failed to be paid, working hours had increased and it was not possible to complain about any of this, and on top of that workers were obliged to engage in laborious leisure activities on behalf of the KDF. I think that, however things deteriorated, the KDF was a great benefit to the working class of Germany. People were happier, were working harder and enjoying their lives more for a period of time before corruption changed things, and despite the harm done, there is nothing more beneficial that happiness, no matter how momentary it is. WERE PEOPLE BETTER OFF UNDER n**i RULE? I think that overall, life was an improvement on what it had been during n**i rule. Even though minorities were very badly done to, they were the minority of the nation and still a very large majority benefited from employment, community gathering and meaning to life. Nazism gave many people hope and a place where they were more comfortable than during the Weimar Republic. Hitler gave many people a reason for being; they were a part of the machine, and their job was to return Germany to what it used to be, this gave hope to millions of people. The only people to not benefit were Jews, opposing party members, gypsies and priests. It has to be considered that at this point, no Jews were placed in concentration camps, and the holocaust was not for at least another few years. So, up to 1939, I think that life was a great improvement for a huge number of people, they were being paid 10 times that of which there were receiving when on dole. The KDF improved leisure, and the National Reich Church gave many an alternative sense of belief. At this point in history, life was at a high for German citizens, but the immediate future was to be the darkest in the history of Europe. SOURCES: The World This Century: Working With Evidence -Neil DeMarco Various web pages through www.google.com The 3rd Reich - Hitler's Germany 1933-39 -Birkdale School project reference sheets. The Kirkham Library -Birkdale School. ...read more.