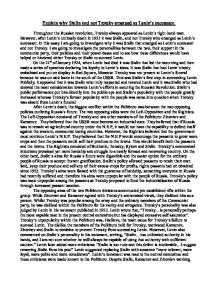 Explain why Stalin and not Trotsky emerged as Lenin's successor. Throughout the Russian revolution, Trotsky always appeared as Lenin's right-hand-man. However, after Lenin's untimely death in 1921 it was Stalin, and not Trotsky who emerged as Lenin's successor. In this essay I am going to investigate why it was Stalin that emerged as Lenin's successor and not Trotsky. I am going to investigate the personalities between the two, their support in the communist party, their policies and their power-bases and to see how these differences would have helped or hindered either Trotsky or Stalin to succeed Lenin. On the 21st of January 1924, when Lenin had died it was Stalin that led the mourning and then made a series of speeches declaring his loyalty to Lenin's ideas. It was Stalin that had Lenin's body embalmed and put on display in Red Square, Moscow. Trotsky was not present at Lenin's funeral because he was on sick leave in the south of the USSR. This was Stalin's first step in succeeding Lenin. Publicly, it appeared that it was Stalin who truly respected and revered Lenin and it was Stalin who had showed the most consideration towards Lenin's efforts in securing the Russian Revolution. ...read more.

While Zinoviev and Kamenev agreed with Trotsky's economical views, they disliked him as a person. Whilst Trotsky was popular among the army and the ordinary members of the Communist party, he was disliked within the Politburo for his vanity and arrogance. Trotsky's personality was also judged by Lenin in his testament published in 1922. Lenin wrote that, "Trotsky...is personally perhaps the most capable man in the present central committee but has displayed excessive self assurance". Trotsky's unpopularity within the Politburo was, I believe, the main cause for Trotsky's failure to succeed Lenin. The dislike the members of the Politburo held for Trotsky, motivated Kamenev, Zinoviev and Stalin to combine to prevent Trotsky from succeeding Lenin. However, Lenin also commented on Stalin's personality in his testament, writing, "Stalin...has unlimited authority in his hands, and I am not sure whether he will always be capable of using that authority with sufficient caution." Lenin later added more criticisms: "Stalin is too rude and this defect is intolerable...I suggest removing Stalin from his post" Lenin suggested replacing Stalin with someone "more tolerant, more loyal, more polite and more considerate". ...read more.

Stalin joined the Rightists in an attempt to drive Trotsky, Zinoviev and Kamenev out of the Politburo. Stalin's position was strengthened when the Party congress elected three of Stalin's close friends and supporters into the Politburo. With their support Stain was able to force Trotsky, Kamenev and Zinoviev from the Politburo in 1925 and later in 1927 Trotsky and Zinoviev were expelled from the Communist Party. His power base helped him to secure leadership of Russia because he was able to eliminate any political opponents and had a large and loyal support base which would support and allow Stalin to do what he wished. In 1928 Stalin became leader of Russia. Stalin public performances contributed to his popularity and his personality did not make him any opponents within the Politburo but these would have not sufficed to succeed Lenin. Therefore, in conclusion I believe that Stalin was able to succeed Lenin primarily because he established a power base within the Communist party that he used to eliminate political opponents and to support any of his decisions through majority votes. A constant throughout Stalin's power struggle was his ruthless drive to become ruler of Russia. Stalin slithered through the communist party, misusing his power to corrupt the integrity of the party so that he may become leader of Russia. ?? ?? ?? ?? ...read more.