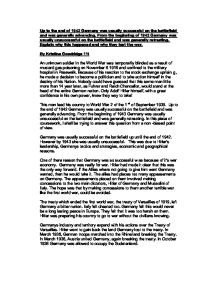 From the beginning of 1943 Germany was usually unsuccessful on the battlefield and was generally retreating - Explain why this happened and why they lost the war.

This helped to convince Hitler he was not going to receive an international reaction. With the threat from Russia on hold, Nazi forces in 1940 occupied Denmark and attacked Norwegian ports, securing iron ore imports from Sweden, which were needed for Germany's war effort. Using Blitzkrieg or 'lightning war' Germany's mission was to quickly defeat and use a nation before anyone would arrive. After a period of 'Phony war' Holland, Belgium and France were defeated in quick series (operation case yellow) in 1940 where British forces were forced to evacuate France. After these quick defeats with little resistance the German army was ready to invade England. In the Battle of Britain, 1940, the Luftwaffe achieved air domination in the first major disagreement of the war. Many believe this was the major turning point for Germany. Hitler's orders where to wipe out the Royal Air Force (RAF) and to prepare the way for Operation Seelowe (Sealion) which consisted of three massive armies invading on the south coast of England. It was at this time Germany began to suffer setbacks. Under the orders of the commander-in-chief of the Luftwaffe, Hermann Goering began in early June the 'softening-up attacks' on British coastal areas and convoys. By the 13th of August or 'Eagle Day' the all-out air battle began, yet the Germans failed to destroy British air warnings and radar systems which were much more advanced than their own. This was the first phase of the battle and although German losses were twice that of Britain Air Chief Marshal Sir Hugh Downing (Commanding-in-Chief, RAF Fighter Command) was facing difficulties as replacement fighter numbers decreased. It was at this time Germany adopted a new approach and reasoned that by attacking the airfields in the southeast they could force the RAF to expose its remaining strength in its defense, which in the beginning seemed promising yet the plan from the start was a gamble. ...read more.

and her army was modern compared to her opponents. Up to 1942 she really only had to fight a war on one front (first in the west against Britain and France and then in the east against Russia). Germany's failure to win at Stalingrad was to cause her to eventually lose the war. From a military point of view, the defeat of the Germans by the Russians was vital to the Allies' overall victory in Europe. Over two-thirds of the German army was in the Russian war and its defeat meant that the Allies in the west (GB, France and USA) had more chance of success against a smaller force. Winston Churchill stated that it was the Russians who "tore the heart out of the German army." The German economy and industry was not geared to a long war - unlike Britain, women were not used to maintain industrial production. By 1943 the strain was beginning to tell and with the US providing support to both Britain and Russia, allied production was greater than that of Germany - a situation made worse by the allied bombing of Germany. Losses on the eastern front could not be replaced while Russia had an almost limitless supply of troops - and after 1943 the US was also sending troops against Germany. As the war progressed military planning was increasingly controlled by Hitler. By 1943 it seems as if Hitler's luck had run out. He began to make major mistakes, for example, his refusal to withdraw was to lose him an army at Stalingrad as well as troops in France after the D-Day landings. Why Germany lost World War II cannot be attributed solely to the Allies lead in weapons and soldiers and their technical and economic control. It must also be considered that there were many fatal flaws in the German organization, both economic and strategic. Despite Hitler's early successes, Germany could not keep up a war and therefore when the element of surprise was removed, the victories turned to defeats. This is why they lost the war. ...read more.