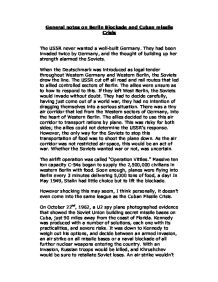 General notes on Berlin Blockade and Cuban missile Crisis The USSR never wanted a well-built Germany. They had been invaded twice by Germany

General notes on Berlin Blockade and Cuban missile Crisis The USSR never wanted a well-built Germany. They had been invaded twice by Germany, and the thought of building up her strength alarmed the Soviets. When the Deutschmark was introduced as legal tender throughout Western Germany and Western Berlin, the Soviets drew the line. The USSR cut off all road and rail routes that led to allied controlled sectors of Berlin. The allies were unsure as to how to respond to this. If they left West Berlin, the Soviets would invade without doubt. They had to decide carefully, having just come out of a world war, they had no intention of dragging themselves into a serious situation. There was a tiny air corridor that led from the Western sectors of Germany, into the heart of Western Berlin. ...read more.

On October 22nd, 1962, a U2 spy plane photographed evidence that showed the Soviet Union building secret missile bases on Cuba, just 90 miles away from the coast of Florida. Kennedy was produced with a number of solutions, each one with its practicalities, and severe risks. It was down to Kennedy to weigh out his options, and decide between an armed invasion, an air strike on all missile bases or a naval blockade of all further nuclear weapons entering the country. With an invasion, Russian troops would be killed, and Khrushchev would be sure to retaliate Soviet loses. An air strike wouldn't guarantee the destruction of all missiles, any remaining could easily be launched, and again retaliation from the USSR would be expected. ...read more.

An air strike would only have lead to many more problems. The blockade was risky, whether or not the Soviet ships would stop at the line was unsure, and if they didn't the American ships would have to retaliate or else they would appear incredibly weak, with no backup to their authority. The Soviet ships did stop however. But when trying to compromise, denial to the UN and inconsiderable alternative cooperation's occurred, making everything very difficult. In the end an agreement was reached and the world could breathe again. Despite the shocking motives of the Berlin Blockade, at no point was there such a difficult decision to make, like the one made by Kennedy in October 1962. The Berlin Blockade was nowhere near being such a tense situation as the Cuban missile crisis, and at no point in history has the world been so close to nuclear war. ...read more.