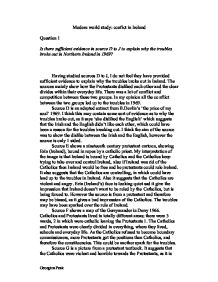 Modern world study: confict in Ireland Question 1 Is there sufficient evidence in source D to J to explain why the troubles broke out in Northern Ireland in 1969? Having studied sources D to J, I do not feel they have provided sufficient evidence to explain why the troubles broke out in Ireland. The sources mainly show how the Protestants disliked each other and the clear divides within their everyday life. There was a lot of conflict and competition between these two groups. In my opinion all the conflict between the two groups led up to the troubles in 1969. Source D is an adapted extract from B.Devlin's 'the price of my soul' 1969. I think this may contain some sort of evidence as to why the troubles broke out, as it says 'she disliked the English' which suggests that the Irish and the English didn't like each other, which could have been a reason for the troubles breaking out. ...read more.

However the source is from a protestant and therefore may be biased, as it gives a bad impression of the Catholics. The troubles may have been sparked over the rule of Ireland. Source F shows a map of the Gerrymander in Derry 1966. Catholics and Protestants lived in totally different areas; there were 3 wards, 2 in which were catholic leaving the Protestants 1. The Catholics and Protestants were clearly divided in everything, where they lived, schools and everyday life. As the Catholics refused to become boundary commissioners, more Protestants got the positions than Catholics, and therefore the constituencies. This could be another spark for the troubles. Source G is a picture from a protestant textbook. It suggests that the Catholics were violent and horrible towards the Protestants, as it is showing a catholic attack. ...read more.

There was a march in Burntollet in January, and the Protestants and Catholics were still fighting, that's when the British army stepped in. the IRA couldn't decide what to do so they split into two groups, this caused even more fighting. Over all there were many sparks and events that led up to the troubles in Ireland. I think there was a fair amount of evidence to explain why the troubles broke out, but in my opinion they were just little things that caused the troubles. I think sources D, E, F, and I were the most important and useful, as they gave evidence to show what led up to the troubles, sources G and H in my opinion were biased. I believe there is just about enough evidence to explain why the troubles broke out; however there were other things as well ?? ?? ?? ?? Georgina Peak ...read more.