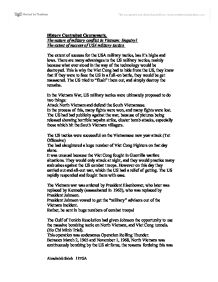 History Controlled Coursework. The nature of military conflict in Vietnam; Enquiry1 The extent of success of USA military tactics. The extent of success for the USA military tactics, has it's highs and lows. There are many advantages to the US military tactics, mainly because what ever stood in the way of the technology would be destroyed. This is why the Viet Cong had to hide from the US, they knew that if they were to face the US in a full-on battle, they would be get massacred. The US tried to "flush" them out, and simply destroy the remains. In the Vietnam War, US military tactics were ultimately proposed to do two things: Attack North Vietnam and defend the South Vietnamese. In the process of this, many fights were won, and many fights were lost. The US had bad publicity against the war, because of pictures being released showing horrible napalm strike, cluster b**b attacks, especially those which hit the South Vietnam villagers. The US tactics were successful on the Vietnamese new year attack (Tet Offensive) The had slaughtered a huge number of Viet Cong Fighters on that day alone. It was unusual because the Viet Cong fought in Guerrilla warfare situations. They would only attack at night, and they would practice many ambushes against the US combat troops. However on this day they carried out and all-out war, which the US had a relief of getting. The US rapidly responded and fought them with ease. ...read more.

The US developed sophisticated methods to defend South Vietnam using the huge air advantage. Once the enemy was located, they could be attacked from the air with bombs, machine guns, and missiles. The US dominant power in the air, was probable what Vietnam feared the most. One of the new bombs developed was the "Cluster b**b" These were a very effective way of killing large number of enemy troops. They were dropped from an aircraft and explode metres above ground level, the mother-b**b would then release 600 smaller b**b-lets. As these hit the ground, they shot out thousands of pieces of metal, killing and injuring over a wide surface area. Later these bombs were developed further and came to carry fibre glass fragments. After an explosion, these fragments could be inhaled and infect the lungs as well as cut into skin. It was later revealed that fibreglass was not easily detectable under X-Ray scans. Another newly developed b**b was called Napalm (gasoline mixed with a paste of chemicals to form jelly. When ignited, the jelly structure means the burning gasoline sticks to substances(like skin), increasing the damage done by this weapon). When Napalm bombs hit the ground and exploded the released flaming petroleum jelly. This was like a burning hot showing. The Jelly would stick to anything and burn it. Things like: Homes, forests, and many human lives. During the Vietnam conflict, over 400,000 tons of napalm was dropped by the US air force onto suspected enemy targets. ...read more.

Representation two symbolizes how the civil rights movement, for African Americans, and the Vietnam War are linked. "Black" people during the war were a minority in the USA, similar to the minority of university students. The USA had many black soldiers in the front lines. They believed they were fighting against a war, which was not just. A similarity between representations one and two is that the pictured people are against the government and the system in which the government deems best for the US citizens. However, there are many differences between representations one and two. The people pictured in one are seen as lucky (mostly for being able to evade the draft with a good reason-Education), and have a future because of their further education. 600,000 young men evaded the draft; 200,000 were convicted of draft offences. 300,000 who applied for CO were denied. Most of these people being African Americans and minority groups and working class/lower class residents of the USA. This is why representation one shows higher-class people at a campus, but, black people in the Battlefield. Part B: Representations one, two and three differ to a certain extent, they all give off a message and a meaning, they collectively symbolize what is going on, (historical context), in and out of the USA (i.e. Vietnam). Representation one shows the level of tolerance that the US had at that time. In order to kill university students you must have had a zero tolerance policy/view on 'fair' and 'righteous' protests. This representation very clearly mirrors the minorities' reaction to the war; which is strongly against the war. ?? ?? ?? ?? Almuhalab Saleh 11TGA ...read more.