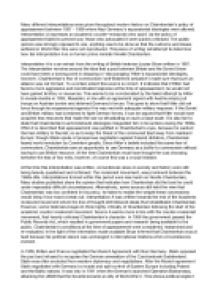 How fair is Louise Shaw's Interpretation on Chamberlain? The interpretation revolves around the idea that a pact between Britain and the Soviet Union could have been a turning point in stopping or discouraging Hitler

Transfer-Encoding: chunked ﻿Many different interpretations were given throughout modern history on Chaimberlain?s policy of appeasement between 1937 - 1938 where Nazi Germany?s expansionist ideologies were allowed. Interpretation A expresses an Academic counter-revisionist view point. As the policy of appeasement failed to prevent war, those who advocated it were quickly criticised. The public opinion was strongly opposed to war, anything was to be done so that the outcome and losses suffered in World War One were not reproduced. This piece of writing will attempt to determine how fair Interpretation A is on former prime minister Neville Chamberlain. Interpretation A is a an extract from the writing of British historian Louise Shaw written in 1987. The interpretation revolves around the idea that a pact between Britain and the Soviet Union could have been a turning point in stopping or ?discouraging? Hitler?s expansionist ideologies, however, Chaimberlain?s fear of communism (?anti-Bolshevik prejudice?) made sure that such an alliance was not formed. To a certain extent this source is correct. It indicates that if Hitler had faced a more aggressive and coordinated response at the time of appeasement, he would not have gained territory or resources. ...read more.

After the Munich agreement Stalin negotiated with Germany to invade and split control of Eastern Europe including Poland and the Baltic nations. It was only in 1941 when the German?s launched Operation Barbarossa, attacking the USSR that the Soviets became an Ally of World War II. This shows political neglect from Chamberlain's side, by presenting Europe and the USSR with opposing views Chaimberlain was allowing Germany to take advantage of the situation. If Hitler had been presented with a unified stance shared between Europe and the USSR he would have been more cautious of the combined military force of Britain, France and the USSR. Britain?s political stance against German expansion would have been more influential and could have lead to the prolonged militarisation of British armed forces and less resources gained by the German army. From the information presented above Interpretation A can be considered valid and fair on Chaimberlain because it can be backed up by specific evidence contemporary to Chamberlain, and the decisions he made in international relations. Interpretation C by Historian Donald Cameron Watt, written in 1991, seems to indicate as its main argument that Chaimberlain?s character and self appreciation was a flaw to his person, and this attribute influenced British politics greatly. ...read more.

In conclusion, overall Interpretation A is not fair on Chaimberlain, though as many other sources suggest, Chaimberlain?s character was difficult, the prime minister presented Britain?s position in international affairs weakly and he could have strove to negotiate with the Soviets to present Europe as a united front that could threaten and control Nazi Germany, external factors made it evident that Chaimberlain could not have dealt with the German problem in any other way. Interpretation A shows a one sided biased argument that does not try to explain Britain?s difficult situation, and can be interpreted as a criticism on the revisionist view purely for self promotion and recognition. Source A is also not fair if we take into account the Soviet?s opinion on British politics and government, and their unwillingness to cooperate and negotiate with Western Europe. Britain?s declining economy, small military and unwillingness to go to war meant that politicians were forced down the route of appeasement and though potential alternative processes can be assessed such as is done in Interpretation A, such interpretations are never truly fair for they cannot justly encompass the complexity of International relations during the late 1930s. ...read more.