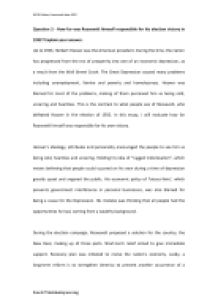 How far was Roosevelt himself responsible for his victory in the election of 1932?

﻿IGCSE History Coursework June 2012 Question 2 - How far was Roosevelt himself responsible for his election victory in 1932? Explain your answer. Up to 1933, Herbert Hoover was the American president. During the time, the nation has progressed from the era of prosperity into one of an economic depression, as a result from the Wall Street Crash. The Great Depression caused many problems including unemployment, famine and poverty and homelessness. Hoover was blamed for most of the problems, making of them perceived him as being cold, uncaring and heartless. This is the contrast to what people see of Roosevelt, who defeated Hoover in the election of 1932. In this essay, I will evaluate how far Roosevelt himself was responsible for his own victory. ...read more.

During the election campaign, Roosevelt proposed a solution for the country, the New Deal, making up of three parts. Short-term relief aimed to give immediate support. Recovery plan was initiated to revive the nation?s economy. Lastly, a long-term reform is to strengthen America to prevent another occurrence of a Depression. However being the biggest and most expensive government campaign ever, it did pay off in its results, not only saving America but also, to some, changing it. The New Deal, unlike Hoover?s policies, appealed to the public and is one of the most important reasons that helped him to win the election Roosevelt?s personality, being optimistic, dynamic, charismatic and all, also helped him. His care in responsibility and his work also makes the citizens believed in him. ...read more.

Hoover is also seen as not doing anything to solve the country?s. There were well known quotes such as ?in hoover we trusted and now we are busted?. Although this view may be false, most of the actions he tried failed to show any effects. This may have led Americans into thinking that nothing was done. In conclusion, Roosevelt himself was mainly responsible for his landslide victory over Hoover, getting 472 electoral votes compared to Hoover?s 59, a staggering difference of 413 votes, surpassing him by over 413 electoral votes in the 1932 election. His idea of the New Deal appealed to many Americans as a solution for the Depression and the return of prosperity. Even though his charismatic, dynamic and he being approachable as well as Americans being desperate for a leader that is not Hoover did help Roosevelt to win, it was only to a certain degree. Word Count : 560 Sawit Trisirisatayawong ...read more.