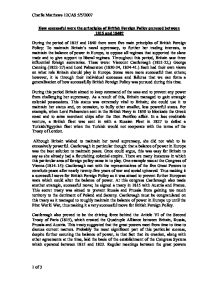 How successful were the principles of British Foreign Policy pursued between 1815 and 1840?

How successful were the principles of British Foreign Policy pursued between 1815 and 1840? During the period of 1815 and 1840 there were five main principles of British Foreign Policy: To maintain Britain's naval supremacy, to further her trading interests, to maintain the balance of power in Europe, to oppose all regimes that supported the slave trade and to give support to liberal regimes. Throughout this period, Britain saw three influential foreign secretaries. These were: Viscount Castlereagh (1821-22,) George Canning (1822-27) and Lord Palmerston (1830-34, 1834-41.) Each had their own views on what role Britain should play in Europe. Some were more successful than others; however, it is through their individual successes and failures that we can form a generalization of how successfully British Foreign Policy was pursued during this time. During this period Britain aimed to keep command of the seas and to prevent any power from challenging her supremacy. As a result of this, Britain managed to gain strategic colonial possessions. This status was extremely vital to Britain; she could use it to maintain her status and, on occasion, to bully other smaller, less powerful states. For example, when Lord Palmerston sent in the British Navy in 1850 to blockade the Greek coast and to seize merchant ships after the Don Pacifico affair. In a less creditable venture, a British fleet was sent in with a Russian Fleet in 1827 to defeat a Turkish/Egyptian fleet when the Turkish would not cooperate with the terms of the Treaty of London. ...read more.

Britain made a number of strategic maneuvers to open up new trading opportunities. For example, Britain aided the Greeks in their revolt against Turkey. She also gave recognition to Latin American republics which declared independence from Spain. Another example would be when Palmerston negotiated a free trade convention with the Turkish Empire. Outside Europe, Castlereagh was still mostly successful. After the wars between Britain and the USA, Castlereagh strove to improve relations between the two countries. He managed to prevent the break down of the relationship in 1818 when General Jackson invaded Spanish Florida and executed two British subjects accused of organizing Indian raids in the US. By maintaining a good relationship with the USA, Castlereagh managed to sustain trading opportunities and generally lessen tension that could lead to future conflict. Britain even went to the extreme of declaring war in the name of maintaining British trade interests. In 1839 Britain began a war with China when the Chinese tried to prevent the trading of Opium to China. It could be argued, however, that Britain's retaliation to this was only to extreme as at the time she was the most successful drug dealing power, therefore, the prevention of the trading of opium to China could have had a considerable influence. China was defeated and therefore Britain was able to trade Opium freely again. ...read more.

If he took a step back and allowed Russian intervention, Russia would expand her influence, causing a fundamental imbalance. The situation intensified further when the Tsar insisted on intervention with, or without international support. However, an agreement was signed by Britain and Russia which offered mediation with the Turks on the condition that the Greeks retained some form of self-government. This was codified in the Treaty of London in July 1827. Unfortunately, the Turks did not cooperate and a British/Russian fleet was sent to destroy the Turkish/Egyptian fleet in October 1827. The fact that the Great Powers had to result to conflict shows bad negotiations and badly carried out foreign policies. Although this does seem to be one of the only obvious examples of badly carried out foreign policy. Another, less selfish Foreign policy was that to oppose the slave trade and all states that supported it. At the time some of the major powers were still using the slave trade. This caused problems. For example when Britain implemented an African naval squadron which reserved the right to 'visit and search' ships and free any slaves on board. This caused friction with European countries who still engaged in the slave trade. However, it is because of Britain's efforts the carry out this particular policy that the slave trade began to disappear from European countries. Overall, the majority of British Foreign Policy was pursued successfully making Britain prosperous and maintaining good relationships with other countries. Charlie Matthews 12CAS 5/5/2007 1 of 3 ...read more.