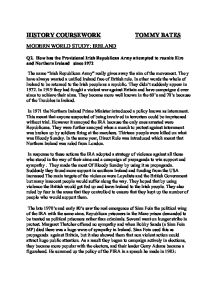 HISTORY COURSEWORK TOMMY BATES MODERN WORLD STUDY: IRELAND Q2. How has the Provisional Irish Republican Army attempted to reunite Eire and Northern Ireland since 1972 The name "Irish Republican Army" really gives away the aim of the movement. They have always wanted a unified Ireland free of British rule. In other words the whole of Ireland to be returned to the Irish people as a republic. They didn't suddenly appear in 1972. In 1919 they had fought a violent war against Britain and have campaigned ever since to achieve their aims. They became more well known in the 60's and 70's because of the Troubles in Ireland. In 1971 the Northern Ireland Prime Minister introduced a policy known as internment. This meant that anyone suspected of being involved in terrorism could be imprisoned without trial. However it annoyed the IRA because the only ones arrested were Republicans. They were further annoyed when a march to protest against internment was broken up by soldiers firing at the marchers. Thirteen people were killed on what was b****y Sunday. In the same year, Direct Rule was introduced which meant that Northern Ireland was ruled from London. In response to these actions the IRA adopted a strategy of violence against all those who stood in the way of their aims and a campaign of propaganda to win support and sympathy . ...read more.

As many people in Northern Ireland wanted peace they welcomed the Agreement but both Republicans and Loyalists rejected it. It was successful though in giving the SDLP a boost and as a result the number of people supporting Sinn Fein dropped significantly. It did not stop the campaign of violence though. The bombing in Enniskillen which killed 60 people in 1987, an IRA landmine that killed 8 soldiers in 1988 and the Shankill bombing showed that the IRA were still trying to achieve their aims by using violence. The first sign of change in policy came in 1993 with the Downing Street Declaration. Gerry Adams realised that Britain had no real wish to control Northern Ireland and he also knew that the power of his party was slipping. The Declaration between John Major and Albert Reynolds offered Sinn Fein the chance to join peace negotiations if they rejected violence. After much thought the IRA declared a ceasefire (1994) but would not give up its arms as it was still suspicious of the British Government. Gerry Adams was also given a visa to visit the USA and he was beginning to be seen as a peacemaker. Whilst progress was being made it was only slow. ...read more.

Evaluation. The main aim of the IRA had always been to unite Ireland. In the 70's and 80's they felt that with terrorist actions they would get their way but this only made the British Government and the Loyalists more determined to stop them. With the rise of Sinn Fein and Gerry Adams the tactics slowly started to change. They realised that non violent action could be effective and eventually they realised that Britain was not going to pull out. They realised they would probably never achieve their main aim but with political power and negotiation they could make their position stronger. The quote below by a former IRA activist Gabriel Megahy in 1998 says it all: He said: " I'm prepared as a Republican to settle. My hopes are for the unification of this country, but I have to accept that this is not going to happen. The Brits are not going to sail away in the sunlight. The people of Ireland had also had enough of all the fighting and so the only way to go forward was by negotiation. The end. Since this was written the IRA have finally decided to decommission their weapons and started to do so this week. Whether this had anything to do with above, or whether it is as response to the World Trade Centre bombing we do not really know. ...read more.