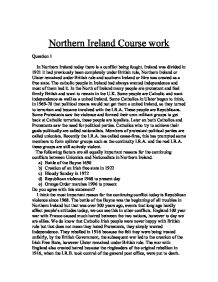 Northern Ireland Course work Question 1 In Northern Ireland today there is a conflict being fought. Ireland was divided in 1921 it had previously been completely under British rule, Northern Ireland or Ulster remained under British rule and southern Ireland or Eire was created as a free state. The catholic people in Ireland had always wanted independence and most of them had it. In the North of Ireland many people are protestant and feel firmly British and want to remain in the U.K. Some people are Catholic and want independence as well as a united Ireland. Some Catholics in Ulster began to think, in 1969-70 that political means would not get them a united Ireland, so they turned to terrorism and became involved with the I.R.A. These people are Republicans. Some Protestants saw the violence and formed their own militant groups to get back at Catholic terrorists, these people are loyalists. Later on both Catholics and Protestants saw the need for political parties. Catholics who try to achieve their goals politically are called nationalists. Members of protestant political parties are called unionists. Recently the I.R.A. has called cease-fires, this has prompted some members to form splinter groups such as the continuity I.R.A. and the real I.R.A. these groups are still actively violent. ...read more.

The orange order was founded in 1795 to keep the protestant religion alive in Northern Ireland; they march every July to celebrate the victory of William of Orange over the Irish at the battle of the Boyne. The routs of the marches sometimes take them through catholic areas, the Catholics do not like this and fell they are being insulted. I do not fell this is as important because if the marches were the only source of tension in Northern Ireland then I don't think there would be as much violence, it is one thing to be insulted it is another to have your family shot, bombed and or killed. Overall I think the main cause of the continuing conflict is the Republican violence. This is because it creates a cycle of retaliation from protestant paramilitaries and makes future generations of Catholics and Protestants hate each other. The Battle of Boyne is not as important because it was so long ago. The creation of the Irish Free State is less important because the fact that Catholics in Northern Ireland don't have independence takes a back seat to the hatred and animosity between the two factions, the bombing and violence is carried out more for revenge than to get independence. b****y Sunday may have added to the conflict but is less important because it was a product of the violence. ...read more.

Later During the Anglo-Irish war he lead the fight against the English actively fighting for freedom. His popularity with the Irish at this time was huge, he inspired the people, and without him the war might have gone badly. The thing he did which had the most impact on Northern Ireland was to sign the treaty that created it, we can never know what would have happened at the conference without Michael, someone else might have refused the creation of the Irish Free State without Ulster and prolonged the war with Britain. What is for certain is that his role in the creation of Northern Ireland was immense. The civil war that followed the treaty signing was very bad for Michael Collins, some of the people were not happy with the treaty and by arming all Catholics in the north, that is pro-and anti- treaty troops, he gave the rebels in the south a licence to put armed resistance. His influence over some of the people was completely gone, but many still agreed with his choice, showing the huge impact he had on Northern Ireland and it's people. Today he is remembered by the Irish as a National hero not the man that gave away Ulster, this shows that all of his good qualities are remembered and he still inspires the people to be patriotic. - By Elliott Prince ...read more.