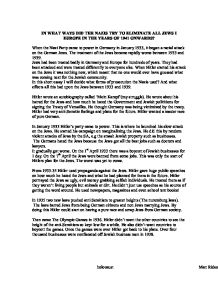 IN WHAT WAYS DID THE NAZIS TRY TO ELIMINATE ALL JEWS I EUROPE IN THE YEARS OF 1941 ONWARDS?

IN WHAT WAYS DID THE NAZIS TRY TO ELIMINATE ALL JEWS I EUROPE IN THE YEARS OF 1941 ONWARDS? When the Nazi Party came to power in Germany in January 1933, it began a racial attack on the German Jews. The treatment of the Jews became rapidly worse between 1933 and 1939. Jews had been treated badly in Germany and Europe for hundreds of years. They had been attacked and were treated differently to everyone else. When Hitler started his attack on the Jews it was nothing new, which meant that no one would ever have guessed what was coming next for the Jewish community. In this short essay I will decide what forms of prosecution the Nazis used? ...read more.

The Germans hated the Jews because the Jews got all the best jobs such as doctors and lawyers. It gradually got worse. On the 1st April 1933 there was a boycott of Jewish businesses for 1 day. On the 7th April the Jews were banned from some jobs. This was only the start of Hitlers plan for the Jews. The worst was yet to come. From 1933-35 Hitler used propaganda against the Jews. Hitler gave huge public speeches on how much he hated the Jews and what he had planned for them in the future. Hitler portrayed the Jews as ugly, evil money grabbing selfish individuals. He treated them as if they weren't living people but animals or dirt. ...read more.

The Fuhrer had decided that such actions were not to be carried out by the parties. The Reich Propaganda Director said that they were not to be seen in public. Jewish school students took a huge hit after the Kristall nacht. The all got expelled from there school. From here on a lot of things were changed in schools. All old text books were scrapped and new anti-Semitism versions were distributed. In the books it described the Jew's as nasty beings. It was all taught as if it was a scientific truth. My conclusion shows that the treatment of the Jews grew beyond marginalization, and further than ever thought by me. The acts of violence were taken too far by the Germans by 1939. ?? ?? ?? ?? holocaust Matt Rideout ...read more.