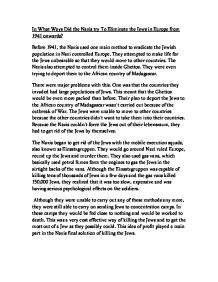 In What Ways Did the Nazis try To Eliminate the Jews in Europe from 1941 onwards?

In What Ways Did the Nazis try To Eliminate the Jews in Europe from 1941 onwards? Before 1941, the Nazis used one main method to eradicate the Jewish population in Nazi controlled Europe. They attempted to make life for the Jews unbearable so that they would move to other countries. The Nazis also attempted to control them inside Ghettos. They were even trying to deport them to the African country of Madagascar. There were major problems with this. One was that the countries they invaded had large populations of Jews. This meant that the Ghettos would be even more packed than before. Their plan to deport the Jews to the African country of Madagascar wasn't carried out because of the outbreak of War. The Jews were unable to move to other countries because the other countries didn't want to take them into their countries. Because the Nazis couldn't force the Jews out of their lebensraum, they had to get rid of the Jews by themselves. The Nazis began to get rid of the Jews with the mobile execution squads, also known as Einsatzgruppen. They would go around Nazi ruled Europe, round up the Jews and murder them. They also used gas vans, which basically used petrol fumes form the engines to gas the Jews in the airtight backs of the vans. ...read more.

Naturally, the situation grew worse as German captured more land, they found more Jews and this meant that step by step more countries could be occupied in the same way, hence more Jews being exterminated. Hitler had stated repeatedly that if a war were to break out in Europe, he would unleash tremendous suffering on European Jewry, whom he blamed for war - mongering. He made good on his promise. The Jews, which had been captured in Poland, were heavily terrorized with public humiliation, beatings and random killings. They were also driven into crowded ghettos in an area of Poland known as the general government. To mark them out, Jews were made to wear a yellow Star of David. Between the periods of 1939 -45, the Nazis dominated most of Europe and created 356 ghettos in Poland, the Soviet Union, the Baltic States, Czechoslovakia, Romania and Hungary. This is because they believed, that Jews were a disease and a permanent threat to the 'Aryan' race, and they were ready to take any action, which could make the areas under their control 'Jew-free'. With all the countries occupied, the Germans knew all the Europeans Jews could now be watched. Therefore the Jews became prisoners inside Europe and anywhere they went they could get captured. ...read more.

The Nazis did everything in their power to keep the extermination programme a secret. Therefore the death camps were located in remote areas in the East. However most people knew that Jews were being deported eastwards. But the Nazis never used such words as 'extermination' or 'killing'. Instead, they used code word such 'final solution' and 'evacuation'. This secret however was revealed in mid 1944. In May 1945 Nazis Germany collapsed the guards fled and the camps ceased to exist as extermination forced labor or concentration camps were turned into camps for displaced persons, which included former holocaust victims unable to be repatriated. The Nazis legacy was an empire of murder and exploitation that has affected people in all parts of the world. The toll in lives was enormous. It is fair to say that the change in the treatment of the Nazis may not have taken place, if the allied nations had not declared war on Germany. Firstly, because there would have been more soldiers and so there might not have been a need to establish gas chambers and therefore many more Jews would have been saved. Also, Hitler had openly threatened that if the allied nations resisted Germany's invasion of Europe, than Hitler would hold the Jews hostage and as a result many Jews were unable to leave Europe and became prisoners in their own country. ...read more.