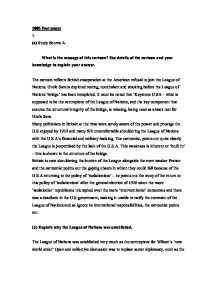 2005 Past paper 1. (a) Study Source A. What is the message of this cartoon? Use details of the cartoon and your knowledge to explain your answer. The cartoon reflects British exasperation at the American refusal to join the League of Nations. Uncle Sam is depicted resting, nonchalant and smoking before the League of Nations 'bridge' has been completed. It must be noted that 'Keystone U.SA - what is supposed to be the centrepiece of the League of Nations, and the key component that ensures the structural integrity of the bridge, is missing, being used as a back rest for Uncle Sam. Many politicians in Britain at the time were sorely aware of the power and prestige the U.S enjoyed by 1919 and many felt uncomfortable shouldering the League of Nations with the U.S.A's financial and military backing. The cartoonist, points out quite clearly the League is jeoperdised by the lack of the U.S.A. This weakness is inherent or 'built in' - this is shown in the structure of the bridge. Britain is now shouldering the burden of the League alongside the even weaker France and the cartoonist points out the gaping chasm in which they could fall because of the U.S.A returning to the policy of 'isolationism' - he points out the irony of the return to this policy of 'isolationism' after ...read more.

His second point was punishment. on the Surface, Lloyd George seemed to want to punish Germany for the war. He had campaigned in the 1918 General Election on the platform of 'Make Germany Pay' and even went as far as to promise a trial for Kaiser Wilhelm. This was popular with the people, who wanted to punish someone for their sufferings. However privately it was Lloyd George who fought the hardest for German interests at Versailles. Germany had been Britain's 2nd biggest trading partner before the war and Britain wanted Germany back on its feet to trade. (b) Explain why Germany was made to pay reparations. Germany was made to pay for the entire cost of the war. After the allied victory Europe was in pieces and especially France, and all the allies expected some compensation from Germany, as was practiced after victory in war. However, the French P.M Clemenceau wanted more than that. He saw the reperations as a security matter for France, he wanted the German economy to be crippled completely so that Germany could ever dream of financing another war. Clemenceau also wanted to punish Germany, this was an almost personal issue, a man who loved his country, Clemenceau really wanted Germany to 'hurt' over the paying of reperations. ...read more.

The point ii - the loss of raw materials and industry hit Germany's economy hard. Germany's economy had been flourishing before the war and now it was completely crippled. They did not hate this in the hated point one and three. It did nothing to harm their pride, but it hit their pockets hard and it was seen as an imposition by the Allies, one that should not be there because Germany had not lose the war. In conclusion, all the points contributed equally to the German resentment of the Treaty. Limitations on its armed forces hit Germany's pride, and naturally they hated the Treaty that they thought humiliated them. For most, losing 13% of Germany's land was just futheir humiliation. But for the refugees it made their lives h**l, and denied them any rights of self-determination. This was quite simply unfair - another reason to hate the Treaty of Versailles. The Loss of land and raw materials affected the German economy and naturally the Germans became poorer - something that was not caused by humiliation or lack of self-determination. All these factors added up to contribute to Germany's hating of the treaty. Some Germans may have been affected more than others by a particular point, and so hated it more, but on the whole they were hated equally and added together to make the Germans feel resentment. ...read more.