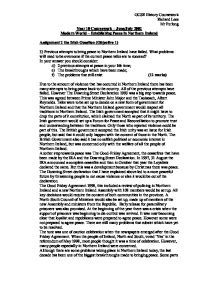 Year 10 Coursework - June/July 2002 Modern World - Establishing Peace in Northern Ireland Assignment 2 the Irish Question (Objective 1) 3) Previous attempts to bring peace to Northern Ireland have failed. What problems will need to be overcome if the current peace talks are to succeed? In your answer you should consider: d) 2 previous attempts at peace in your life time; e) The breakthroughs which have been made; f) The problems that still exist (12 marks) Due to the amount of violence that has occurred in Northern Ireland there has been many attempts to bring peace back to the country. All of the previous attempts have failed. However The Downing Street Declaration 1993 was a big step towards peace. This was agreed between Prime Minister John Major and the Taoiseach, Albert Reynolds. ...read more.

Another step towards peace was The Good-Friday Agreement, the ceasefires that have been made by the IRA and the Downing Street Declaration. In 1997, 31 August the IRA announced a complete ceasefire and then in October that year the Loyalists declared the same. But this was a development because by Christmas there was peace. The Downing Street declaration that I have explained above led to a more peaceful future by threatening people to not cause violence or else it would be out of the declaration. The Good Friday Agreement 1998, this included a review of policing in Northern Ireland and a new Northern Ireland Assembly with 108 members would be set up. All key decisions would require the consent of both communities in the province. ...read more.

Some parts have been successful although some hadn't. We will see problems in Northern Ireland for a long time too come and whether these problems are solved is an ambiguity because the two governments cannot please everyone. As long as violence goes on so does the battle for peace. In July 1999 the Assembly fell apart when the Unionists refused to take part in forming a new government because the IRA had not started decommissioning weapons. Senator George Mitchell had to carry out a review to rescue the peace process. The latest and most damaging event has been the allegation that republicans have been running a spying operation in the Northern Ireland Office. David Trimble committed his party to pulling out of power sharing in January 2003 if republicans did not commit themselves to exclusively peaceful means. The spying allegations prompted Mr Trimble to bring forward his threat to walkout. GCSE History Coursework Richard Lees Mr Furlong ...read more.