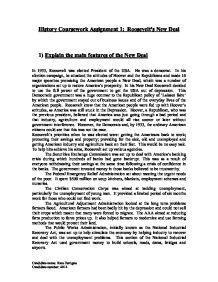 History Coursework Assignment 1: Roosevelt's New Deal 1) Explain the main features of the New Deal In 1933, Roosevelt was elected President of the USA. He was a democrat. In his election campaign, he attacked the attitudes of Hoover and the Republicans and made 16 major speeches promising the American people a New Deal, which was a number of organizations set up to restore America's prosperity. In his New Deal Roosevelt decided to use the full power of the government to get the USA out of depression. This Democratic government was a huge contrast to the Republican policy of 'Laissez faire' by which the government stayed out of business issues and of the everyday lives of the American people. Roosevelt knew that the American people were fed up with Hoover's attitudes, as America was still stuck in the Depression. Hoover, a Republican, who was the previous president, believed that America was just going through a bad period and that industry, agriculture and employment would all rise sooner or later without government interference. However, the Democrats and, by 1933, the ordinary American citizens could see that this was not the case. Roosevelt's priorities when he was elected were: getting the Americans back to work; protecting their savings and property; providing for the sick, old and unemployed and getting American industry and agriculture back on their feet. This would be no easy task. To help him achieve his aims, Roosevelt set up various agencies. The Securities Exchange Commission was set up to deal with America's banking crisis during which hundreds of banks had gone bankrupt. This was as a result of everyone withdrawing their savings at the same time following a crisis of confidence in the banks. The government invested money in those banks believed to be trustworthy. The Federal Emergency Relief Administration set about meeting the urgent needs of the poor. It spent $500 million on soup kitchens, blankets, employment schemes and nurseries. ...read more.

Long's scheme also stated that taxes should be shared between all Americans and that everyone over 60 should be given a state pension. Dr Townsend set up a number of Townsend clubs which campaigned for a pension of $200 a month for all those over the age of 60, providing that the money was all spent by the end of each month. On the other hand, the business community and the Republicans felt that the New Deal was doing too much. They also believed that it was too complicated though they had other concerns as well. They did not agree with the government providing support for the trade unions or higher wages. They thought the market should deal with these concerns. These business men and Republicans believed the New Deal scheme to be very similar to that carried out in the Soviet Union and criticized the Democrats as being Communists and that Roosevelt was acting like a dictator. Their other fear concerning Roosevelt's New Deal was an issue involving the wealthy Americans. They argued that the wealthy had become wealthy as a result of hard work and dedication. The New Deal proposed to increase taxes, which would discourage people from working hard and would give money to people for doing nothing or doing unnecessary jobs. Although Roosevelt faced opposition, the American voters seemed to support him. In the 1936 elections, he won 27 million votes - with the highest margin of victory ever achieved by a US President. However, after the 1936 elections, Roosevelt faced opposition from the Supreme Court. The Court was dominated by Republicans who were against the New Deal and it could refuse to pass laws if they felt they went against the American Constitution. An example of this is that in 1935, the Schechter Poultry Corporation was found guilty of breaking NRA Regulations in three ways: it had sold diseased chickens for human consumption, it had exploited workers and it had threatened government inspectors. ...read more.

In spite of this, most New Deal programmes were aimed to help male manual workers rather than women - only around 8000 women were involved in the CCC. Local governments tried to avoid paying out social security payments to women by introducing special qualifications and conditions. Also, Francis Perkins was viciously attacked in the press as being a Jew and a Soviet spy. Even her cabinet colleagues tended to ignore her at social gatherings. It is clear that the New Deal, introduced by Franklin D Roosevelt in 1933 had some successes. It was successful in that the American public, that is to say the voters, supported it. There is no doubt that it did improve the lives of many Americans and that because of it America was slowly, but surely, regaining its prosperity. It was also very successful in dealing with unemployment, the industrial workers, the economy, the Black and Native Americans as well women. However, each of these issues brought failures as well the successes. The high profile figures of America opposed the New Deal and criticized it as not doing enough; whilst the business men felt it was doing too much. Unemployment never fell below what it had been before 1929 despite the New Deal's attempts to reduce the number of unemployed workers. When Roosevelt cut the New Deal's budget, the country fell into recession once again and Black and Native Americans still lived in poverty even though organisations working for the New Deal tried to improve their situations. As for women, they were still discriminated against by many officials working for the New Deal as well as major businesses. After having explored all the successes and failures of the New Deal, the result seems to be ambiguous: the New Deal was not a complete success although it did help restore America's prosperity and enabled the American population to regain faith in its country. Assignment 1: Roosevelt's New Deal Candidate name: Kate Ferrigno Candidate number: 4014 Candidate name: Kate Ferrigno Candidate number: 4014 ...read more.