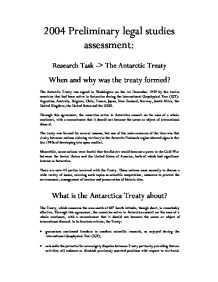 The Antarctic Treaty: When and why was the treaty formed?

2004 Preliminary legal studies assessment: Research Task -> The Antarctic Treaty When and why was the treaty formed? The Antarctic Treaty was signed in Washington on the 1st December 1959 by the twelve countries that had been active in Antarctica during the International Geophysical Year (IGY): Argentina, Australia, Belgium, Chile, France, Japan, New Zealand, Norway, South Africa, the United Kingdom, the United States and the USSR. Through this agreement, the countries active in Antarctica consult on the uses of a whole continent, with a commitment that it should not become the scene or object of international discord. The treaty was formed for several reasons, but one of the main concerns of the time was that rivalry between nations claiming territory in the Antarctic Peninsula region showed signs in the late 1940s of developing into open conflict. Meanwhile, some nations were fearful that the district would become a pawn in the Cold War between the Soviet Union and the United States of America, both of which had significant interest in Antarctica. There are now 45 parties involved with the Treaty. These nations meet annually to discuss a wide variety of issues, covering such topics as scientific cooperation, measures to protect the environment, management of tourism and preservation of historic sites. What is the Antarctica Treaty about? The Treaty, which concerns the area south of 60� South latitude, though short, is remarkably effective. ...read more.

This concerned other countries and environmental organisations, which began to lobby for Antarctica to become a world park. Australia and France refused to sign the convention. Instead they began discussions on ways to protect the Antarctic environment from mining and pollution. * The Protocol on Environmental Protection to the Antarctic Treaty (or the Madrid Protocol) was signed in 1991 after the failure of the minerals convention. It is a comprehensive environmental agreement on Antarctica which bans any mining activity for 50 years and declares Antarctica a "natural reserve devoted to peace and science". The protocol requires that all human activities be planned and carried out on the basis of sufficient information on possible environmental impacts. Monitoring of all Antarctic activities is to be undertaken and an improved system for protected areas was established. What has Australia's involvement been with the treaty? For many years, diplomats had been talking seriously about developing a treaty to govern Antarctic affairs, and when scientists became aware of this, they used the opportunity to obtain support from the nations involved in these talks, and pushed for a major effort to set up scientific programs on the continent. The International Geophysical Year, which lasted for the eighteen-month period from July 1957 to December 1958, was vastly lucrative, but its scientific developments raised many unanswered queries and it was made clear that the Antarctic research endeavour would need to be sustained. ...read more.

These nations have taken on the responsibility for the conservation of the delicate environment of Antarctica and wise use of the continent's resources. The Treaty nations agreed to refrain from carrying out any exploration or exploitation, and that exploitation will not be allowed unless adequate measures are first put into place to protect and conserve the unique Antarctic environment. There has always been an abiding cooperation in the sharing of research and findings between the scientists in Antarctica. This cooperation never wavered, even when some scientists' home nations were in the midst of military confrontations and internal tensions. This is a fine testimonial to the spirit of international cooperation that has been brought about by the Antarctic Treaty. For example, during the Cuban missile crisis, the Vietnam War and the conflict in the Falkland Islands, all those in the Antarctic scientific community continued an uninterrupted, unbroken and peaceful exchange of information despite the conflict. Under the Antarctic Treaty, activities on the continent have always remained diplomatic and non-violent, and because of this, Antarctica can honestly be declared a "continent of peace." As the Antarctic Treaty System matures it has become acknowledged as one of the most successful sets of international agreements, setting an example of diplomatic, peaceful collaboration for the rest of the world. As an environmental regime it is unique and distinctive - an entire continent, which is fundamentally undisturbed, will continue to be protected because of the cooperation and commitment of the parties involved with the Treaty. ...read more.