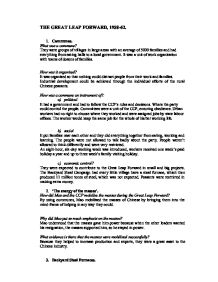 THE GREAT LEAP FORWARD, 1958-62. 1. Communes. What was a commune? They were groups of villages in large areas with an average of 5000 families and had everything from eating halls to a local government. It was a unit of work organisation with teams of dozens of families. How was it organized? It was organised so that nothing could distract people from their work and families. Industrial development could be achieved through the individual efforts of the rural Chinese peasants. How was a commune an instrument of?: a) political It had a government and had to follow the CCP's rules and decisions. Where the party could control the people. Committees were a unit of the CCP, ensuring obedience. Urban workers had no right to choose where they worked and were assigned jobs by state labour offices. The worker would keep the same job for the whole of his/her working life. b) social It put families near each other and they did everything together from eating, working and learning. The people were not allowed to talk badly about the party. ...read more.

4. 'Chaos on a grand scale'. How did the 'backyard steel furnace campaign' affect agricultural production? 3/11 million tonnes of steel were too impure. 1/10 of villagers made steel, not enough farmers. Too much steel was made. What other policies of the Great Leap Forward damaged agricultural production and future supply of food? No peasants on farms, party officials igored this fact and falsely claimed more than the peasants produced for the state and What else damaged agriculture during these years? Droughts, floods, saturation and famine. (Three Bitter Years) What was the result of this for the people? 9 million deaths in 1960 20 million deaths from 1959-62 from starvation. 5. Liu Shaoqi and Deng Xiaoping. Why did the Great Leap Forward lead to Mao giving up power to Liu and Deng? Some party leaders blamed Mao for the 'three bitter years' and demanded his resignation. Mao was too popular among the masses of Chinese so the party leaders persuaded him to hand over the post of Head of State to Liu Shaoqi but remained as the CCP leader. What policies did Liu and Deng pursue? ...read more.

A Soviet scientist, who was working in China during the Great Leap Forward, describes what he saw; this book was published in 1964. "The peasants were not in the fields during the spring planting season. They were carrying out the orders of the Party, working day and night at the mines and home-made blast furnaces to fulfil the "Drive to Produce Metals Locally". And we all know the results: they did not obtain any more iron than before, and there was much less bread and rice to go round. According to the official figure, 4,000,000 tons of iron were processed in 1957, but of this amount hardly more than 1% was usable, the remaining 99% being slag, unwashed ore, or, even more often, a pure invention of the government." A factory worker describes events in China in 1958. "We were told that China would get rich quick if everyone concentrated on iron and steel. So we dropped everything else and built brick chimneys in the factory yards. Radiators, pots and pans went into ovens and peasants poured in from the countryside to help." ...read more.