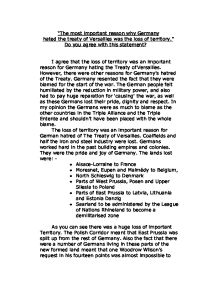 &quot;The most important reason why Germany hated the treaty of Versailles was the loss of territory.&quot; Do you agree with this statement?

"The most important reason why Germany hated the treaty of Versailles was the loss of territory." Do you agree with this statement? I agree that the loss of territory was an important reason for Germany hating the Treaty of Versailles. However, there were other reasons for Germany's hatred of the Treaty. Germany resented the fact that they were blamed for the start of the war. The German people felt humiliated by the reduction in military power, and also had to pay huge reparation for 'causing' the war, as well as these Germans lost their pride, dignity and respect. In my opinion the Germans were as much to blame as the other countries in the Triple Alliance and the Triple Entente and shouldn't have been placed with the whole blame. The loss of territory was an important reason for German hatred of The Treaty of Versailles. Coalfields and half the iron and steel industry were lost. Germans worked hard in the past building empires and colonies. They were the pride and joy of Germany. ...read more.

Not only did the Germans feel that they had not started the war, but they did not even feel that they had lost the war. They thought that they had only agreed to a cease-fire. Therefore they should not had been treated so harshly or been treated as a loosing state. Germany only signed the treaty because they thought it would be based on Wilson's 14-point plan. The massive reduction in military power angered and humiliated a lot of the German people. The German worked and fought hard for what their military had achieved and possessed and it was the pride and joy of Germany. Germany had been greatly weakened so in the occasion of war she would not be able to defend herself. They were to hand over submarines, aircrafts and armoured vehicles, and in the last order to show their strength, they sacrificed their military forces. During the First World War, Germany had about 2.2 million troops and to go from this to 100,000 troops had very serious affects. ...read more.

Buildings were in need of restoration and whole towns had to be rebuilt. All this required a sufficient amount of money, which Germany did not have very much of, because of the reparations. Also there was food shortage, most of which was to be sent of to other countries. In conclusion, I disagree that the main reason of Germanys hatred was based on the loss of territory, even though that is an important factor. In my opinion the most important reason to have angered the Germans is the "war guilt" clause. This is because it is simply a fabrication of the truth. Germany did not cause the war by themselves, which the Germans knew, but they still had to take sole responsibility for the war. Which caused most of the hatred, being blamed for something you did not do. I suppose it made Germany feel weak, like a child being told off and punished for something they didn't fully understand. I feel, because of this treaty Germany, even to this day, has gone down in history as the loosing side and the side that started the war, but Germany was very greatly angered by the treaty of Versailles for all of the reasons listed in this essay. ...read more.