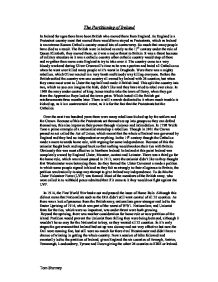 The Partitioning of Ireland.

The Partitioning of Ireland In Ireland for ages there have been British who moved there from England. As England is a Protestant country most that moved there would have stayed as Protestants, which as Ireland is an extreme Roman Catholic country caused lots of controversy. So much that many people have died as a result. The British were in Ireland as early as the 17th century under the rule of Queen Elizabeth, they moved there, as it was a major threat to Britain. It was a threat because of military structure as it was a catholic country other catholic country would stop of there and re-gather then move onto England to try to take over it. The country came to a very b****y weekend during Oliver Cromwell's time as he was a puritan and hated all Catholics so when he went over killed many people at it's worst in Drogheda. ...read more.

Over the next two hundred years there were many rebellions kicked up by the settlers and the Crown. Because of this the Protestants set themselves up into groups so they can defend themselves, this also improves their power through violence and intimidation. In 1798 Wolfe Tone a prime example of a nationalist started up a rebellion. Though in 1801 the Crown passed an act called the Act of Union, which meant that the whole of Ireland was governed by England and they had no independent or anything. In the 19th century though the Catholics made a move towards home rule, with arguing for some independence. Because of this the unionist fought back and argued back so that nothing would weaken their ties with Britain. Obviously this was most effective in Northern Ireland. ...read more.

Nationalism, and Unionist fears for the ties, which were so important, was under threat were both growing. Beyond the uprising, there was another consideration for home rule or now partition of the island. Partition would prevent the Unionist from felling they were being betrayed, although it wouldn't be so easy for the Nationalist to buy, as they wanted all 32 counties. In it's early stages the government that Ireland had set up was clumsy and not very effective but now the Dail were running fine, but still were no match for there rival Westminster and didn't have a chance of winning in getting the whole country. Now a session of talks followed and eventually led to the partition of Ireland, given England the six counties of Armagh, Antrim, Fermanagh, Londonderry, Tyrone and Down giving the other 26 counties to EIRE or Ireland. Tom Sturmey ...read more.