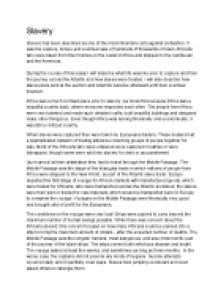 ﻿Slavery Slavery has been described as one of the most inhumane acts against civilisation. It saw the capture, torture and eventual sale of hundreds of thousands of black Africans who were taken from their homes on the coast of Africa and shipped to the Caribbean and the Americas. During the course of this essay I will describe what life was like prior to capture and then the journey across the Atlantic and how slaves were treated. I will also describe how slaves were sold at the auction and what life was like afterward until their eventual freedom. Africa was a much civilised place prior to slavery; we know this because Africa was a beautiful country back, where everyone respected each other. The people from Africa were very talented and made such detailed crafts, built beautiful buildings and designed many other things too. ...read more.

The conditions on the voyage were very bad! Ships were packed to carry beyond the maximum number of human beings possible. While there was concern about the Africans aboard, this concern focused on how many Africans could be packed into a ship to bring the maximum amount of dollars - after the expected number of deaths. The Middle Passage was the longest, hardest, most dangerous, and also most horrific part of the journey of the slave ships. The ships carried both infectious disease and death. The voyage lasted at least five weeks, and sometimes as long as three months. In the worse case, the captains did not provide any kinds of hygiene. Suicide attempts occurred daily and in painfully cruel ways. Slaves tried jumping overboard and even asked others to strangle them. Life on the plantations for many slaves was extremely hard. ...read more.

The acts did nothing to stop the trade of slaves within the nation's borders, but did end the overseas commerce in slaves. To enforce these laws, Britain and the United States both patrolled the seas off the coast of Africa, stopping suspected slave traders and confiscating the ship when slaves were found. The human cargo was then transported back to Africa. In conclusion, slaves were very loyal to their masters. Even though they were brutally treated, experienced inhuman pain, they still had the strength. Slavery brought a lot of fear to the lives of black people: slaves were punished by being whipped almost to death; they had to work in any temperature conditions, sometimes even freezing; they had to lose their family members - just for being black and therefore slaves. Nevertheless, this has become one of the most important lessons for the human nation ? there is no condition under which one person can have domination over another one. Everyone is equal, and nobody is perfect. ...read more.