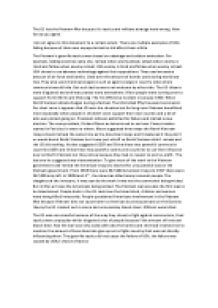 The US lost the Vietnam War because its tactics and military strategy were wrong. How far do you agree?

﻿The US lost the Vietnam War because it?s tactics and military strategy were wrong. How far do you agree. I do not agree to this statement to a certain extent. There are multiple examples of USA failing because of their own unpopular tactics did affect them a little. The Vietnam?s guerrilla tactics were based on sabotage and sudden ambustion. For example, raiding enemies camp site, retreat when enemy attack, attack when enemy is tired and follow when enemy retreat. USA enemy is tired and follow when enemy retreat. USA chose to use advance technology against their oppositions. They used excessive amount of air force and bombs. Used over the amount of bombs used during world war two. ...read more.

President Johnson admitted his failure and started a new election. The new president, Richard Nixon as determined to end war. Peace treaties started in Paris but it went no where. Nixon suggested three ways the North Vietnam troops should retreat the same time as the American troops and threatened it they don?t us would b**b North Vietnam but it was just a bluff so North Vietnam didn?t retreat and the US did nothing. He also suggested USSR and China these two powerful communist countries USSR and China these two powerful communist countries to use their influence over on North Vietnam but they refuse because they had no reason to and no profit. ...read more.

The Vietnam war was also the first was to be televisioned. People back in the US could see the blood shed, children and women were being killed innocently. People questioned Americans involvement in the Vietnam War because Vietnam dies not cause harm to American but because base on the Domino theory the US created such a scene and unnecessary blood sheet. Millions were killed. The US was unsuccessful because of the way they chose to fight against communism, their tactics were unpopular which disgusted a lot of people because f the amount of innocent blood shed. Also the war was very costly with also the bombs and chemical involved not to mention the amount of lives American give up on to fights country that was not directly influencing them. The guerrilla tactics did not cause the failure of USA, the failure was caused by USA/s choice of tactics ...read more.