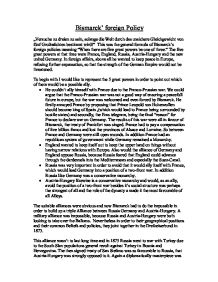 Bismarck' foreign Policy "Versuche zu dreien zu sein, solange die Welt durch das unsichere Gleichgewicht von f�nf Gro�m�chten bestimmt wird!" This was the general formula of Bismarck's foreign policies meaning "When there are five great powers be one of three." The five great powers at that time were France, England, Russia, Austria-Hungary and the new united Germany. In foreign affairs, above all he wanted to keep peace in Europe, refusing further expansation, so that the strength of the German Empire would not be threatened. To begin with I would like to represent the 5 great powers in order to point out which of them would be a possible ally. * He couldn't ally himself with France due to the Franco-Prussian war. We could argue that the Franco-Prussian war was not a good way of ensuring a peacefull future in europe, but the war was welcomed and even forced by Bismarck. He firstly annoyed France by proposing that Prince Leopold von Hohenzollen should become king of Spain ,(which would lead to France being surrounded by hostile states) and secondly, the Ems telegram, being the final "reason" for France to declare war on Germany. The results of this war were all in favour of Bismarck, the treaty of Frankfurt was singed. France had to pay a compensation of five billion francs and lost the provinces of Alsace and Lorraine. ...read more.

Explaining his decisions to Keiser William 1 he said "For Russia no-one knows what eruptions of revolutionary elements may suddenly happen in the interior of the great empire." In fact looking at what happened further in Russia this statement is a prove of his diplomatically and politically skills. However Russia who felled disadvantaged moved large numbers of troops to the German borders. As a result, instead of getting scared Bismarck reacted to this by putting Russia under pressure by making a dual alliance with Austria-Hungary containing, that in case of a Russian attack they would support one another. As consequence Russia now feared isolation in Europe and proposed to renew the Dreikeiserbund. Regarding to this Bismarck had again succeeded to maintain peace and above that had equally successful accomplished to turn his own disadvantage to his benefit, indicating again his talents as a diplomatic jangler. Although the renewed Alliance only stated that in case of a forth power attacking them they would remain neutral. Moving further, Italy was upset of France's taking over Tunis, not at last, but unknown to Italy forced on by Bismarck. The transformation of the dual into a triple alliance between Italy, Germany and Austria-Hungary would allow Italy to follow it's colonial ambitions in safety. Despite Italy's liberal constitution, it's rather radical government and the differences in religious believes, Bismarck signed the treaty achieving a further isolation of France and looking for advantages due to its strategic importance. ...read more.

But British parliament refuses. He has no choice, but to try to renew the Reinsurance Treaty with Russia, but without success because, William II comes to the German throne who is opposed to it. This means trouble for Bismarck, he had nearly complete control over William I, but that was not going to work with William II. In June 1890 Bismarck gets dismissed. With reference to all the different treaties and Alliances Bismarck had set up throughout 26 years we must come to the conclusion that he was a diplomatical genius. He managed the impossible and avoided that work broke out between the 2 great powers of Austria-Hungary and Russia, without having particular benefit from it. Not to forget he renounced to participate in colonial policy in order to avoid war caused by colonial rivalry. But on the other Hand I think that a foreign policy based strongly on the isolation of one single country was not a policy able to last. In order to achieve long lasting peace he should have tried to sign treaties with France concerning Alsace and Lorraine, and find a solution to calm the constant will of revenge of France. In addition in my opinion he should have treated Russia more carefully in order to prevent anykind of hostility. In conclusion for me you can't have a successful foreign policy whilst your two main aims (maintaining peace and the isolation of France) contradict each other. ...read more.