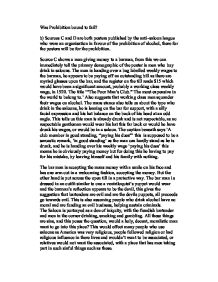 Was Pohibition bound to fail Question B

Was Prohibition bound to fail? b) Sources C and D are both posters published by the anti-saloon league who were an organisation in favour of the prohibition of alcohol, there for the posters will be for the prohibition. Source C shows a man giving money to a barman, from this we can immediately tell the primary demographic of the poster is men who buy drink in saloons. The man is handing over a bag labelled weekly wages to the barman, he appears to be paying off an outstanding bill as there are myriad glasses upon the bar, and the register on the till reads $15 which would have been a significant amount, probably a working class weekly wage, in 1920. The title '"The Poor Man's Club." The most expensive in the world to belong to.' Also suggests that working class men squander their wages on alcohol. The mans stance also tells us about the type who drink in the saloons, he is leaning on the bar for support, with a silly facial expression and his hat balance on the back of his head at an odd angle. This tells us this man is already drunk and is not respectable, as no respectable gentleman would wear his hat this far back or would he have drunk his wages, or would be in a saloon. ...read more.

The little boy is holding up his dish, its empty, he has no food to eat because there is no money as it's all being spent in the saloon. There is a dispossession notice on the floor, indicating that his family are losing all their belongings and their home because they have no money to pay bills or food. This is because all of their family income is being spent in the saloon on alcohol. This shows the way in which the cost of alcohol can affect family life. The caption is 'the saloon is well named "the poor mans club" it keeps its members and their families always poor.' This could attract a secondary demographic of wives and relatives of the men in saloons, it could be persuading them to get their husbands out of the saloon. The content of this Poster is clearly against Saloons, therefore against prohibition. Source D shows a boy and a girl standing outside a saloon, the caption above says 'Daddy's in there, and our shoes and stocking and clothes and food are in there too, and they'll never come out.' This suggests all of the families' money is being spent in the saloon depriving the children from the necessities which they require. ...read more.

The over all idea of this poster is that saloons directly affect the family of the men in there, turning the family against the father/husband, using all the money on alcohol instead of buying the family essentials, the family is suffering due to the saloon. So this poster is for prohibition as it displays saloons of evil places that cause suffering in families which were a cornerstone of American society. The poster clearly indicates that this cornerstone is being eroded by the evils of alcohol. Sources C and D are both posters produced by the anti-saloon league. The authorship clearly indicates that both posters are against prohibition as the anti-saloon league were a group who supported the introduction of prohibition in America. The content and message of these posters reflect this view as both show the ill affects of alcohol, with particular attention paid to family life. Source C shows the immorality and the evils of the drinking lifestyle and portrays a family experiencing the negative affects of having a father who drinks, this poster was aimed at men who drink in saloon's and their families. Whereas source D is aimed specifically on fathers as it focuses on the affects of drinking on children and aims to invoke feelings of guilt in an attempt to gain support for their cause. ...read more.