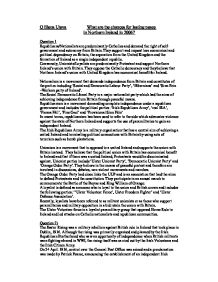 What are the chances for lasting peace in Ireland in 2006?

O Elena Uteva What are the chances for lasting peace in Northern Ireland in 2006? Question 1 Republicans/Nationalists are predominantly Catholics and demand the right of self-government and autonomy from Britain. They support and request less economical and political dependency on Britain, the separation from the United Kingdom and the formation of Ireland as a single independent republic. Conversely, Unionists/Loyalists are predominantly Protestant and support Northern Ireland's union with Britain. They oppose the Catholic democracy and they believe that Northern Ireland's union with United Kingdom has economical benefit for Ireland. Nationalism is a movement that demands independence from Britain and constitutes of the parties including 'Social and Democratic Labour Party', 'Hibernians' and 'Sinn Fein -Workers party of Ireland'. The Social Democratic Liberal Party is a major nationalist party which had the aims of achieving independence from Britain through peaceful means. Republicanism is a movement demanding complete independence under a republican government and includes the political parties: 'Irish Republican Army', 'real IRA', 'Fianna F�il', 'Fine Gael' and 'Provisional Sinn F�in' In resent terms, republicanism has been used to refer to the side which advocates violence against the state of Northern Ireland and supports the use of paramilitaries to gain an independent Ireland. The Irish Republican Army is a military organization that has a central aim of achieving a united Ireland and terminating political connections with Britain by using acts of terrorism such as b**b plantations. ...read more.

Many Irish immigrants were supportive of IRA and sent money to Irish Republicans in order to raise funds for paramilitary groups. The Irish people were infuriated by the fact that the British government did not offer aid and that the exportation of grain and livestock to England continued and accused the government of committing genocide. The support of republican parties increased, especially by immigrants in USA, Australia and Canada. The effect of the potato famine on the Protestants was that they felt guilt about not providing aid to the Irish and felt responsible for the million or so deaths. Tony Blair's apology for British indifference in the potato famine has created different attitude however, in which Protestants recognise the fault of the British but are annoyed by the persistence of the issue and its constant arousal in the conflict between Protestants and Catholics. Question 3) There have been several previous attempts to bring peace to Northern Ireland and to resolve the conflict between the unionists/loyalists ad nationalists/republicans. The Downing Street Agreement was a declaration proclaimed on 15 December 1993 by British Prime Minister, John Major and Irish Taoiseach, Albert Reynolds The declaration was an agreement between England and Northern Ireland to enforce a cease-fire and stated that the conflict between Southern and Northern Ireland should be resolved without outside interference: 'The British government agree that it ...read more.

Another problem that still persists is the presence of hardline republican movements and the Real IRA's failure of following the Good Friday Agreement and carrying out the decommissioning of weapons. The Real IRA refuses to lay down their arms and insists that an independent Ireland must be achieved through the use of military action and terrorism. The Independent Monitoring Commission have stated in their October 2006 report that the real IRA 'remains active and dangerous'. In order to solve the existing problems in Northern Ireland, several measures should be taken into action. Firstly, segregated schools should be abolished in order to allow interaction between both Catholic and Protestant children and hence decrease prejudice towards the opposite religion. As well as that, unbiased learning about both religions should be compulsory and teachers from catholic and protestant backgrounds should be present at school. In order to solve the problem of crime and drugs, employment should increase and the unemployed should be encouraged and supported to join the work force. Former paramilitaries and the police force should begin to cooperate in a bid to regain control of the criminals involved in the drug trade. As well as that, negotiations should be made with the Real IRA to persuade them to decommission their weapons and gain a more peaceful approach to their desire of gaining an independent republic. Sinn Fein and DUP should be persuaded to resolve their conflict in order to sustain the Northern Ireland Assembly. ...read more.