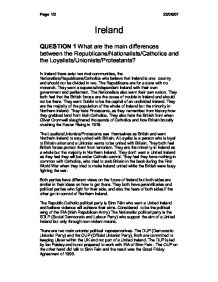 What are the main differences between the Catholics and the Protestants

Ireland QUESTION 1 What are the main differences between the Republicans/Nationalists/Catholics and the Loyalists/Unionists/Protestants? In Ireland there exist two rival communities, the Nationalists/Republicans/Catholics who believe that Ireland is one country and should not be divided in two. The Republicans are for a state with no monarch. They want a separate/independent Ireland with their own government and parliament. The Nationalists also want their own nation. They both feel that the British forces are the cause of trouble in Ireland and should not be there. They want Dublin to be the capital of an undivided Ireland. They are the majority of the population of the whole of Ireland but the minority in Northern Ireland. ...read more.

Both parties have different views on the future of Ireland but both sides are similar in their ideas on how to get there. They both have paramilitaries and political parties who fight for their side, and also the fears of both sides if the other got in control of Northern Ireland. The Republic Catholic political party is Sinn F�in who want a United Ireland and believe violence will achieve their aims. Considered to be the political wing of the IRA (Irish Republican Army) The Nationalist political party is the SDLP (Social Democratic and Labour Party) who support the aim of a United Ireland but only through non-violent means. There are two main unionist political representatives. ...read more.

The Protestant Loyalist Paramilitary's are a response to the IRA and are responsible for the brutal killing of Catholics. Recently both UDA (Ulster Defence Association) and the UVF (Ulster Volunteer Force) are committed to the peace process. There are also physical divisions between the two groups. They both have separate schools for Protestants and Catholics and different streets where rarely are there Catholic and Protestant family living on the same street. The historical divisions are that Protestants have dominated Northern Ireland and the Catholic majority are poorer than Protestants. The divisions are related to religion, education, housing and the franchise. So Catholics feel like second-class citizens. The two communities have different aims but within their groups have the same goal but different methods to get there. Page 1/2 22/06/07 ...read more.