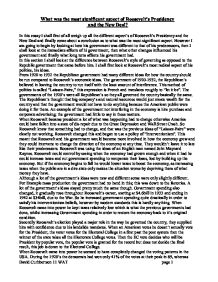 What was the most significant aspect of Roosevelt's Presidency and the New Deal?

What was the most significant aspect of Roosevelt's Presidency and the New Deal? In this essay I shall first of all weigh up all the different aspect's of Roosevelt's Presidency and the New Deal and finally come about a conclusion as to what was the most significant aspect. However I am going to begin by looking at how his government was different to that of his predecessors, then I shall look at the immediate affects of hi government, then what other changes influenced his government and finally what long term affects his government had. In this section I shall look at the difference between Roosevelt's style of governing as opposed to the Republic government that came before him. I shall first look at Roosevelt's most radical aspect of his politics, his ideas. From 1920 to 1932 the Republican government had many different ideas for how the country should be run compared to Roosevelt's economic ideas. The government of 1920-1932, the Republican's believed in leaving the country to run itself with the least amount of interference. This method of politics is called "Laissez-Faire," this expression is French and translates roughly to "let it be". The governments of the 1920's were all Republican's so they all governed the country basically the same. The Republican's thought that big company's and natural resources would just create wealth for the country and that the government would not have to do anything because the American public were doing it for them. An example of the government not interfering in the economy is hire purchase and corporate advertising; the government had little to say in these matters. When Roosevelt became president a lot of what was happening had to change otherwise America could have fallen into a state of dis-repair due to the Great Depression and Wall Street Crash. So Roosevelt knew that something had to change, and that was the previous ideas of "Laissez-Faire" were clearly not working. Roosevelt changed this and began to use a policy of "Interventionism". ...read more.

Although unnecessary these job's brought down the Unemployment percentage from 30% in 1932 to 25% in 1933. On the other hand by 1934 the number of Federal employees had dropped from 4.3 million to 1.1 million. This is because most of the jobs were short term projects and the government weren't able to pay them as Roosevelt refused to raise taxes. Also although Federal Employees fell so did the national unemployment percentage by almost 3%, this means although less people were employed by the government more were taken on by private companies. Overall over Roosevelt's time in office from 1933 to 1942 national unemployment went from 25% to 5% making his time in office extremely successful in battling unemployment. The Alphabet agencies played a fundamental role in lowering unemployment by creating vast amounts of jobs for America's unemployed therefore I think the Agencies were one of the main reasons for the drop in unemployment. Not only did they supply American's with jobs but they created new jobs and raised national moral. During 1937 Federal employees dropped almost by 1 million compared to the previous year. The reason for this is the Supreme Court; during 1937 the Supreme Court deemed that many of the Alphabet agencies were breaking the law according to the US constitution. Roosevelt's answer to this situation was to increase the number of judges in the Supreme Court from 9 to 15; this would give him at least 6 judges inside the Supreme Court so he would have total control. Many of Roosevelt's advisor's were against this decision and advised against it, this proves how determined Roosevelt was to reform the Country. However Roosevelt never actually carried out this decision and by 1938 he had settled his dispute with the Supreme Court and Federal employees rose once again to 4.3 million. By looking at the figures for GNP and GNP capita you can tell when the economy started to recover. ...read more.

The basic idea of Interventionism used by Roosevelt has been adopted by some present day parties. Although it was not Roosevelt's idea, it was Keynes, he was the first leader to apply this way of thinking in government and some might say this changed America for the better. That evidence of Roosevelt's ideas can still be found in today's society. Thirdly I believe that his policies still have an effect over how the American government runs today. Firstly he increased the size of the White House staff to allow the government to run more effectively and productively, this not only created more jobs, a short term advantage, but also changed the way in which a government runs. This is still in place today and this is another example of how he changed the government for good. His use of the caucus system can still be found today in the American government another example of how he influenced things in the long term. Finally his election results. These have in no way influenced or changed how the modern government runs or functions. Evidence of his results having an impact on today's government is very hard to find. In Conclusion to the question "What was the most significant aspect of Roosevelt's Presidency and the New Deal," I believe there is no one significant answer as each aspect not only affected each other but each aspect is the most significant in different area's, The role of the President is probably the most important long lasting aspect whereas at the time his policies were the most significant as the brought about the New Deal and the 3 r's. His results were just as important at the time as these influenced many of his ideas which in turn affected his policies and the way in which he changed the role of President. This is why I believe it is impossible to state on single aspect as they are all interlinked and affect each other. In my opinion they are all as important as each other. ?? ?? ?? ?? David Cuthbertson 11 WAT page 1 ...read more.