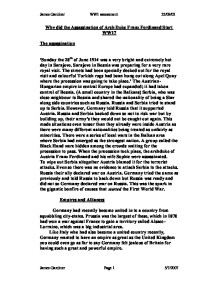 Why did the Assassination of Arch Duke Franz Ferdinand Start WW1?

Why did the Assassination of Arch Duke Franz Ferdinand Start WW1? The assassination 'Sunday the 28th of June 1914 was a very bright and extremely hot day in Sarajevo. Sarajevo in Bosnia was preparing for a very rare royal visit. The streets had been specially decked out for the royal visit and colourful Turkish rugs had bean hung out along Apel Quay where the procession was going to take place.' The Austrian-Hungarian empire in central Europe had expanded; it had taken control of Bosnia. (A small country in the Balkans) Serbia, who was close neighbour to Bosnia and shared the nationality of being a Slav along side countries such as Russia. Russia and Serbia tried to stand up to Serbia. However, Germany told Russia that it supported Austria. Russia and Serbia backed down so not to risk war but by building up, their army's they would not be caught out again. This made situations even tenser than they already were inside Austria as there were many different nationalities being treated as unfairly as minorities. ...read more.

Although, it had to sort out a few rivalries. Britain was concerned about France who also had a growing empire in the 19th century; it also had concerns about a powerful empire in the east, Russia. Above all Britain was concerned about Germany and its growing power and want for foreign empires. By the early 20th century, Britain had sorted matters with France by coming to agreements with colonies in North Africa. Russia meanwhile had been beaten in a war with Japan, which weakened them a little. Britain began to have friendly negotiations with France and Russia. Britain, France and Russia were all worried about growing German power in central Europe as they had just beaten France in a recent war and had stood up to Russia when Austria took over Bosnia. Britain signed an agreement with France in 1904 and Russia in 1907. The Triple Ente was formed. The arms race Germany felt surrounded, it was almost sure that the Ente was planning something. It still however planned to increase its empire by building a fleet of ships which was second largest to that of the U.K. ...read more.

Why did the assassination spark WW1? In 1905, the people of Morocco were in a struggle against there French leaders. Kaiser Wilhelm showed his support for the Moroccan people. France was furious. He wanted to be a major power in Africa. Except he was humiliated, when the people rejected his views and international powers made him back down. The Kaiser was furious. In 1911, he sent a gunboat to establish a naval base in the territory. Again, he was made to back down. This was just another event that could have triggered the war, as it was a reason for France to declare war on Germany. Fortunately, it did not. The major powers were only looking for excuses to declare war on each other. The fact of the matter is that this was not the reason they used. Instead, they used the assassination to start the war. The want to further empires was a major part to play in the causes of the war. Nevertheless, the most important role in the causes of the war was the fact that everyone was preparing for war and NOT! Settling down and discussing with each other how to prevent it. James Gardiner WW1 assessment 25/09/02 James Gardiner Page 1 5/7/2007 ...read more.