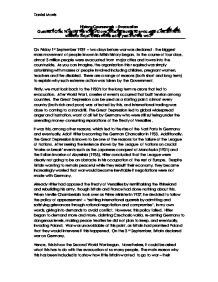 Why did the British Government decide to evacuate children from Britains major cities in the early years of the war?

History Coursework - Evacuation Question One: Why did the British Government decide to evacuate children from Britain's major cities in the early years of the war? On Friday 1st September 1939 - two days before war was declared - the biggest mass movement of people known in British history began. In the course of four days, almost 3 million people were evacuated from major cities and towns into the countryside. As you can imagine, the organisation this required was simply astonishing with masses of people involved including children, pregnant women, teachers and the disabled. There are a range of reasons (both short and long term) to explain why such extreme action was taken by the Government. Firstly, we must look back to the 1930's for the long term reasons that led to evacuation. After World War I, a series of events occurred that built tension among countries. The Great Depression can be used as a starting point; almost every country (both rich and poor) was affected by this, and international trading was close to coming to a standstill. The Great Depression led to global widespread anger and frustration, worst of all felt by Germany who were still suffering under the unending money-consuming reparations of the Treaty of Versailles. It was this, among other reasons, which led to the rise of the Nazi Party in Germany and eventually, Adolf Hitler becoming the German Chancellor in 1933. Additionally, the Great Depression is known to be one of the reasons for the failure of the League of Nations. After seeing the lenience shown by the League of Nations on crucial 'make-or-break' events such as the Japanese conquest of Manchuria (1931) ...read more.

Ev. 4 Government Evacuation Scheme. First of all, the children in the city were not productive. To be direct, they were economically and militarily useless in the war effort. They were far too young to engage in any type of combat in the war, and were also too young and uneducated to do any type of jobs. The children were a burden which prevented the rest of the civilians from getting on with the war effort, and therefore they had to be temporarily moved. On the other hand, in the country children proved far more useful. Although not able to fight or help with practical jobs, they could easily grow crops in the country which were useful as Britain had extreme food shortages due to attacks on their transport ships. In the city the children were nothing more than consumers, as they did not have the space nor skills to grow crops, though in the country there was far more room and the host families that they lived with were more used to growing their own food than buying it as their communities were smaller. To further this point, if children were in the city they were more of a burden not just to the war effort, but also to the Civil Defence Forces - those who had to rescue or prevent people from involvement in dangerous situations. The first reason for this is that naturally, if there are more people their job will automatically be made harder, but on top of this - children are more likely to get into trouble - they would not follow precautions as well as adults and may play in dangerous areas if not supervised. ...read more.

Despite this, an additional 11,000 children were sent overseas to through private evacuation, though parents were warned that they were doing this at their own risk. The final series of evacuations took place towards the end of the war (1944-45) when the V1 and V2 rockets were invented. These were the most dangerous aerial weaponry to be built yet and were boasted by Hitler of being the weapons that would win the war. Their full name is "Vergeltungswaffe" meaning 'vengeance weapon'. This caused widespread fear and the last wave (though smaller than the other two) of evacuations in Britain before the end of the war. In conclusion, the reasons for the evacuation of children were vastly varied, and the Government had to fuel the process with vast amounts of effort and propaganda. The two main reasons of evacuating children was that they were safer from aerial attack in the country than in the highly populated cities and that morale was kept high in the knowledge that the innocent future generation was secure. Evacuation was put into place because Britain was unprepared and underarmed for the war, so had to take a defensive position rather than offensive. Today - even with more advanced forms of transport - it still leaves some in shock that such a mass movement of people could occur in such a small space of time. Although it had some problems (i.e children leaving and returning to the countryside), evacuation has proved to be one of the key factors of Britain's success - it both sustained morale and worked as an excellent form of protection for the British youth. ?? ?? ?? ?? Daniel Morris ...read more.