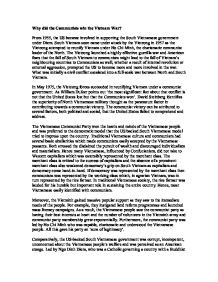 Why did the Communists win the Vietnam War?

Why did the Communists win the Vietnam War? From 1955, the US became involved in supporting the South Vietnamese government under Diem. South Vietnam soon came under attack by the Vietcong in 1957 as the Vietcong attempted to reunify Vietnam under Ho Chi Minh, the charismatic communist leader of the North. The Vietcong launched a highly effective guerilla war and American fears that the fall of South Vietnam to communism might lead to the fall of Vietnam's neighbouring countries to Communism as well, whether a result of internal revolution or external aggression, prompted the US to become more and more involved in the war. What was initially a civil conflict escalated into a full-scale war between North and South Vietnam. In May 1975, the Vietcong forces succeeded in reunifying Vietnam under a communist government. As William Duiker points out 'the most significant fact about that conflict is not that the United States lost but that the Communists won'. ...read more.

Furthermore, the communist party was led by Ho Chi Minh who was capable, charismatic and understood the Vietnamese people. All this gave his party an 'aura of legitimacy'. Comparatively, the US-backed South Vietnamese government was corrupt, incompetent, unconcerned about the Vietnamese people's welfare and was perceived as an American stooge. Led by Ngo Dinh Diem, who was a Catholic governing a country with a Buddhist majority, the South Vietnamese government grew increasingly alienated from its citizens. Diem was despotic and nepotistic; his brother was appointed the Archbishop of South Vietnam. His irreverent and insensitive attitude towards Buddhism, the prevailing religion of the day, triggered the civil war when the self-immolation of a Buddhist monk in protest drew only his contempt. The popularity of the communist party soared and this aided them in conducting guerilla warfare as they were able to blend in with civilians and were assured that their identity would be protected. ...read more.

Since foreign policy is often shaped by domestic opinion, the United States was unable to fully commit to the war as each US president risked public backlash if they overcommitted to Vietnam especially since public support for the war was rapidly waning. To remedy the situation, President Nixon attempted to increasingly involve the South Vietnamese in the war effort. However, those who were not communist sympathizers were content to have the Americans wage war on their behalf and were reluctant to actively participate. Essentially, 'a combination of political and military techniques in both urban and rural areas with a diplomatic and psychological offensive that undermined public support for the party's rivals' allowed the communists to emerge victorious. Despite the overwhelmingly superior technology and firepower of the American forces, the sheer willpower and intelligent strategy of the communists eventually prevailed. In 1973, US troops were withdrawn, although fighting between North and South Vietnam continued. In May 1975, Vietcong forces took Saigon and created a united Vietnam that was admitted to the United Nations in 1977. ...read more.