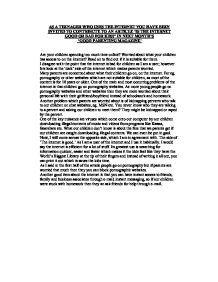 AS A TEENAGER WHO USES THE INTERNET YOU HAVE BEEN INVITED TO CONTRIBUTE TO AN ARTICLE 'IS THE INTERNET GOOD OR BAD FOR KDS?' IN NEXT MONTH'S 'GOOD PARENTING MAGAZINE'

AS A TEENAGER WHO USES THE INTERNET YOU HAVE BEEN INVITED TO CONTRIBUTE TO AN ARTICLE 'IS THE INTERNET GOOD OR BAD FOR KDS?' IN NEXT MONTH'S 'GOOD PARENTING MAGAZINE' Are your children spending too much time online? Worried about what your children has access to on the internet? Read on to find out if it is suitable for them. I disagree with the point that the internet is bad for children as I am a user; however lets look at the 'dark' side of the internet which makes parents worried. ...read more.

Its greatest use is searching for information quicker, easier and faster which makes it the kids feel like they have the World's Biggest Library at the tip of their fingers and instead of writing it all out, you can print it out which is saves the kids time. As I said in the first half of the article people go on pornography but if parents are worried that much then they you can block pornographic websites. Another good item about the internet is that you can have instant access to friends, family and business associates through e-mail, instant messaging, so if our children were stuck with homework then they an ask friends for help through e-mail. ...read more.

In summary, the report is quite basic. The report states the benefits/drawbacks of the internet. However there's are very brief and the student doesn't explained or justify their points which is needed for high marks. The report states that the student is going to look at the 'dark' side of the report. I feel that this word doesn't really fit into the report, and should be 'drawbacks of the internet', as the report is for a magazine and this would be professional. Thus, the examiner would be looking for a professional report, and this could be an improvement which would improve the report to the expected standard. The report states that pornography websites could be blocked. However how this this possible? The report could include 'Parents may be able to block harmful website such as pornography if there download some software known as an Internet filter which enables them to block known harmful content'.

The report states that parents may not feel that pornography is suitable, however why is this? The report could include 'Parents may feel that the pornography on a number of different websites, do not send a right and proper message to their children. This is due to that pornography websites display a number of images/videos which are out of touch with reality, and the events do not occur in real life. Thus, a number of children may believe that the events that unfold on the internet are 'normal', and this may be damaging to children.' This would show the examiner, that the student understands the implications of pornography websites. In addition, there could include other examples, such as gambling sites, hate sites and other various websites which may appear to be harmful to children. The student talks about how children could be preyed on by a number of people, which could be harmful. The report could state why this is a real danger and how simple this would be using a number of social networking websites, such as Facebook due to their low privacy settings.