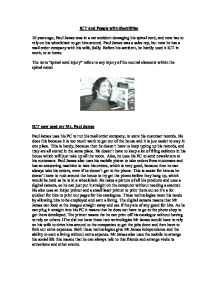 ICT and People with disabilities 10 years ago, Paul James was in a car accident damaging his spinal cord, and now has to rely on his wheelchair to get him around. Paul James was a sales rep, but now he has a mail order company with his wife, Sally. Before his accident, he hardly used it ICT in work, or at home. The term "spinal cord injury" refers to any injury of the neutral elements within the spinal canal. ICT now used my Mr. Paul James Paul James uses his PC to run his mail order company, to store his customer records. He does this because it is too much work to get out of the house and it is just easier to stay in one place. This is handy, because then he doesn't have to keep typing up his records, and they are all stored in the same place. He doesn't have to keep a lot of filing cabinets in his house which will just take up all the room. Also, he uses his PC to send newsletters to his customers. Paul James also uses his mobile phone to take orders from customers and has an answering machine to take his orders, which is very good, because then he can always take his orders, even if he doesn't get to the phone. ...read more.

Mr. Paul James and his wife started to make and edit their own videos on a pc using a camera and a camcorder; also they are hoping to create a DVD instead of using analogue video tapes. Using their computer in their home is a lot easier than going down to a studio and ask them to edit it for them. Mr. Paul James also has to be careful that he doesn't break any copyright laws when he creates music. Mr. Paul James has Sky + which he uses to record his programs, while his wife watches her programs. This is useful as he doesn't have to risk missing his programmes while finishing off his work. He uses sky to watch movies, and his sports. He played football and cricket before the accident, but now he just has to watch them. He doesn't like going to the cinemas, because he can't choose where to sit, so he has to either go, and go with all the trouble, or just wait for it to come on DVD or sky. At his house, he has a 32" plasma screen so he can watch videos and DVDs which saves him going to the cinema. ...read more.

Mr. Paul James is now thinking of making a website to expand his business but he doesn't know how to yet, so he is going to have to learn how to do it. He is also thinking of getting a webcam so he can contact his parents and friends who are in different parts of the country. Overall, Mr. Paul James uses his ICT at home really well. It saves his a high amount of time and is a lot easier than going out the house and having to sort out the transport. He can't get the joy out of a lot of activities that he used to do, but he is still able to do some of the things he enjoys. He also has to be careful with his company as well that he doesn't release any information about his staff or his costumers. He must be registered under the D.P.A (data protection act) as this is personal data. I think that ICT is very effective to meet his needs. He is able to get in contact with his family and friends who live in different parts of the country. He is able to send out newsletters out by email via the internet. ?? ?? ?? ?? ...read more.