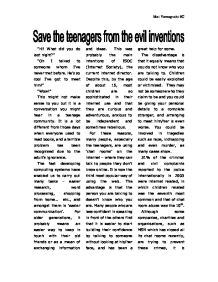 "Hi! What did you do last night?" "Oh I talked to someone whom I've never met before. He's so cool I've got to meet him!" "Wow!" This might not make sense to you but it is a conversation you might hear in a teenage community. It is a lot different from those days when everyone used to read books, and a terrible problem has been recognised due to the adult's ignorance. The fast developing computing systems have enabled us to carry out many tasks - easier research, word processing, shopping from home... etc., and amongst them is 'easier communication'. For older generations, it probably means an easier way to keep in touch with their old friends or as a mean of exchanging information and ideas. This was probably the main intentions of ISOC (Internet Society), the current internet director. Despite this, by the age of about 15, most children are so sophisticated in their internet use and that they are curious and adventurous, anxious to be independent and sometimes rebellious. ...read more.

You could be involved in tragedies such as rape, kidnapping and even murder, as many cases show. 31% of the criminal and civil complaints reported to the police internationally in 2003 were internet related, in which children related was the seventh most common and that of chat room abuse was the 10th. Although some companies, charities and organisations, such as MSN which has closed all its chat rooms recently, are trying to prevent these crimes, it is impossible to ban this system entirely because many important enterprise companies know that they could be after a lot of money from these young people through advertisements. Even if the chat rooms do become illegal, there are the darker sides of the internet where illegal substances and weapons are dealt, and chat rooms are going to join them the day the law is passed. Just to make the parents even more worried, the mobile phones are soon going to be loaded with full internet services. ...read more.

Also the internet is a very good source of information and they are expected to use it for their schoolwork, and without it they would have to spent more time looking for the information they want in a library etc. on top of the amount of work they have to do. They are also pressured into using e-mails, chat rooms and the messenger service as another convenient way of communicating with their friends. Reading this, many parents will be disappointed to know that there are no obvious solutions to this problem. However, organisations such as Operation Scorpion and Crime Survivor Guides are promoting internet advices to raise awareness of what's behind the attractive screens in front of those teenagers. What adults need to remember is that internet does have negative sides as well as beneficial sides and the community, the police and the parents have to work together to make the internet as safe as possible. ?? ?? ?? ?? Mai Yamaguchi 9C ...read more.