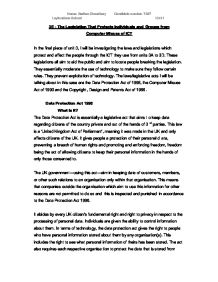 The Legislation That Protects Individuals and Groups using IT. Use of It by myself and an adult in employment.

3E - The Legislation That Protects Individuals and Groups from Computer Misuse of ICT In the final piece of unit 3, I will be investigating the laws and legislations which protect and affect the people through the ICT they use from units 3A to 3D. These legislations all aim to aid the public and aim to locate people breaking the legislation. They essentially moderate the use of technology to make sure they follow certain rules. They prevent exploitation of technology. The laws/legislative acts I will be talking about in this case are the Data Protection Act of 1998, the Computer Misuse Act of 1990 and the Copyright, Design and Patents Act of 1988. Data Protection Act 1998 What is it? The Data Protection Act is essentially a legislative act that aims to keep data regarding citizens of the country private and out of the hands of 3rd parties. This law is a 'United Kingdom Act of Parliament', meaning it was made in the UK and only affects citizens of the UK. It gives people a protection of their personal data, preventing a breach of human rights and promoting and enforcing freedom, freedom being the act of allowing citizens to keep their personal information in the hands of only those consented to. The UK government-using this act-aim in keeping data of customers, members, or other such relations to an organisation only within that organisation. This means that companies outside the organisation which aim to use this information for other reasons are not permitted to do so and this is inspected and punished in accordance to the Data Protection Act 1998. It abides by every UK citizen's fundamental right and right to privacy in respect to the processing of personal data. Individuals are given the ability to control information about them. In terms of technology, the data protection act gives the right to people who have personal information stored about them by any organisation(s). ...read more.

The victim would essentially be at the mercy of the hacker. Not just key logging but hackers can also access important files of their victim. This makes hackers very dangerous. They also often work to send viruses to people's computers. This is why the Computer Misuse Act was set up. The growth of technology also meant the growth of hacking and the malicious use of technology. With this act in place, hackers could face up-to 5 years in prison and an unlimited fine. Hacking is essentially trespassing into another's property but its potential misuse can be extremely high, hence such extreme charges. Brief history of the Computer Misuse Act The law was coined up after the case of Robert Schifreen and Stephen Gold in 1984-1985.They gained access to the account of a BT engineer, giving them the ability to explore the whole system and even access the personal message box of Prince Philip. With current laws, they would have been charged and fined quite a lot, but the current laws did not condemn what they had done. This is when Parliament made the decision to make new laws regarding hacking and thus, the Computer Misuse Act formed. What does it consist of? The Computer Misuse Act essentially makes the following things illegal: * Hacking - unauthorized people gaining access to computer networks * Data Misuse and unauthorized transfer or copying - file sharing * Copying and distributing software, music and film - Including copying CD's on your computer and sharing them on the internet * Email and chat room abuses - Impersonation and deception or spreading malicious rumours * p*********y - any material showing illegal acts stored on computers * Identity and financial abuses - Identity theft and misuse of credit cards and even printing counterfeit money * Viruses - programming and deliberately spreading viruses (Taken from pass-ict.co.uk) Some of these offences are also covered by the Copyright, Design and Patents Act. ...read more.

This stops money being essentially stolen from Sarah whose sales would have been bad due to the ease of downloads. 3D - Technology used by a community Library Libraries use copyright to allow them to distribute author's books to the public. Each free loan gets the government to give the author money so libraries are encouraged as the community are using books for free and the authors are getting credit and being paid for their work. Evaluation While this act is quite useful in stopping companies going bankrupt, it's still being broken on a day-to-day basis. Piracy has become so world-wide and common that it's incredibly hard to stop it altogether. Sometimes, the act is also unjustified in what it does. For example, while Limewire did allow people to download a lot of music for free, it was provided by Limewire peers meaning Limewire users themselves were the ones who spread the copyrighted media. The owners of Limewire are made to take the blame for all the apparent loss the copyrighted creators have accumulated. This, however, is entirely subjective as it doesn't mean that every download would have equated a purchase. Due to this, they are being sued for a ridiculous 72 trillion dollars. It shows that the law doesn't always work perfectly. Conclusion These three lawful acts all help keep the cyber world safe and justified. They are all bound by their own rules and help make technology easier for all kinds of people, including the community itself. And other than the three acts mentioned, there are also acts such as health and safety at work and health and safety regulations. These acts account towards the safety and health of workers. They account for what employees work with, the risk and formulate an ethical/moral response to their work from that. If a certain technology has the risk of giving cancer or producing radiation, then that has to be accounted and employees have to be given fair treatment. ?? ?? ?? ?? Name: Sadian Choudhury Candidate number: 7027 Leytonstone School 13411 ...read more.