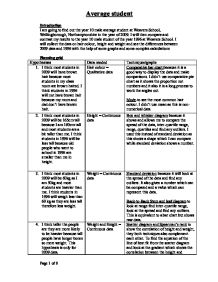 I am going to find out the year 10 male average student at Weavers School. I will collect the data on hair colour, height and weight and see the differences between 2009 data and 1996 with the help of some graphs and some complex calculations

Introduction I am going to find out the year 10 male average student at Weavers School, Wellingborough, Northamptonshire in the year of 2009. I will then compare and contrast my results to the year 10 male student of the year 1996 at Weavers School. I will collect the data on hair colour, height and weight and see the differences between 2009 data and 1996 with the help of some graphs and some complex calculations Planning grid Hypothesises Data needed Techniques/graphs 1. I think most students in 2009 will have brown hair because most students in my class room are brown haired. I think students in 1996 will not have brown hair because my mum and dad don't have brown hair. Hair colour = Qualitative data Comparative bar chart because it is a good way to display the data and make comparisons. I didn't use comparative pie chart as it shows the proportion not numbers and it also it is a long process to work the angles out. Mode-to see the most common hair colour. I didn't use mean as this is non-numerical data 2. I think most students in 2009 will be 165cm tall because I am 160cm tall and most students are a bit taller than me. ...read more.

Hair colour No. of Year 10 males in 1996 Year 10 males in 2009 Brown 19 17 Red 1 0 black 4 7 Blonde 6 5 Ginger 0 1 My Result: I was right as most students in 2009 have brown hair but I was also wrong as most students in 1996 also have brown hair. The modal colour in both years is brown. One student in1996 had red coloured hair which is then replaced with the colour ginger in 2009. My assumption is that students now may prefer ginger as their hair colour than red. Colour blonde also has been pretty consistent as in 1996, six students had blonde hair while in 2009 five students had blonde hair. Hypothesis 2 My hypothesis: I think most students in 2009 will be 165cm tall because I am 160cm tall and most students are a bit taller than me. I think students in 1996 will be less tall because older people who went to school in 1996 are smaller than me in height. My result (Box and Whisker): The Tallest year 10 male in 1996 was 193cm tall while in 2009 the tallest year 10 male is 192cm tall, so I was wrong. ...read more.

I have used comparative bar chart for hypothesis 1, which shows no. of people with certain hair colour. I used box and whisker for hypothesis 2 which was good as it showed me interquartile range of the two datasets and showed me outliers which helped me decide the consistency of the datasets. I used Back-to-Back stem and leaf diagram for hypothesis 3 which showed be an outlier, the range, median and the upper and the lower quartiles. I used scatter diagram and Spearman's rank in hypothesis 4 which showed me the correlation between. However, I would change some of these techniques if I were to do this again. For hypothesis 1, I would use comparative pie chart rather than comparative bar chart as a comparative pie chart shows the proportion of each hair colours in each year which makes it easier to conclude the results when compared with concluding from numbers which are read off from a bar chart. For hypothesis 3, I would use Spearman's rank which would complement standard deviation as one shows the correlation and the other will show the spread of the data, this would make a great conclusion giving me better finial conclusion. ?? ?? ?? ?? Average student Page 1 of 1 ...read more.